In the Wake of the Deaths of 12 Brave U.S. Marines at Kabul’s Airport: Minnesota’s Representative Omar Ask Pres. Biden To Pardon A Leaker of Government Documents

MINNESOTA (August 26, 2021)—In the wake of the death of 12 brave U.S. Marines who gave the ultimate sacrifice–for liberty and freedom — U.S. Congresswoman Ilhan Omar has called on President Joe Biden to issue a pardon for Daniel Hale, a former military analyst who leaked government documents revealing the civilian toll of Washington’s drone programme.

Hale was last month sentenced to 45 months in prison, after pleading guilty to one charge out of five related to the dissemination of the documents, which exposed secrets about US drone warefare, including how often civilians were killed during strikes in Yemen, Pakistan, Afghanistan, and Somalia.

In a letter sent to the White House on Thursday, signed by the lone congresswoman, Omar said Hale’s motivation for leaking the documents, “as outlined in his deeply moving letter to the judge in his case, was profoundly moral”.

“The information, while politically embarrassing to some, has shone a vital light on the legal and moral problems of the drone program and informed the public debate on an issue that has for too many years remained in the shadows,” Omar said.

“The legal question of Mr Hale’s guilt is settled, but the moral question remains open. I strongly believe that a full pardon, or at least a commutation of his sentence, is warranted.”

Before his sentencing, Hale delivered a handwritten letter – obtained by The Intercept – to the court, giving his reasoning for leaking the documents.

He said he became “increasingly aware that the war had very little to do with preventing terror from coming into the United states and a lot more to do with protecting the profits of so-called defense contractors”.

“I believe that it is wrong to kill, but it is especially wrong to kill the defenseless,” Hale said in court last month, as reported by the Washington Post. He added that he shared what “was necessary to dispel the lie that drone warfare keeps us safe, that our lives are worth more than theirs”.

Omar said in her letter that Biden often states “the United States should lead not just by the example of our power but by the power of our example”. 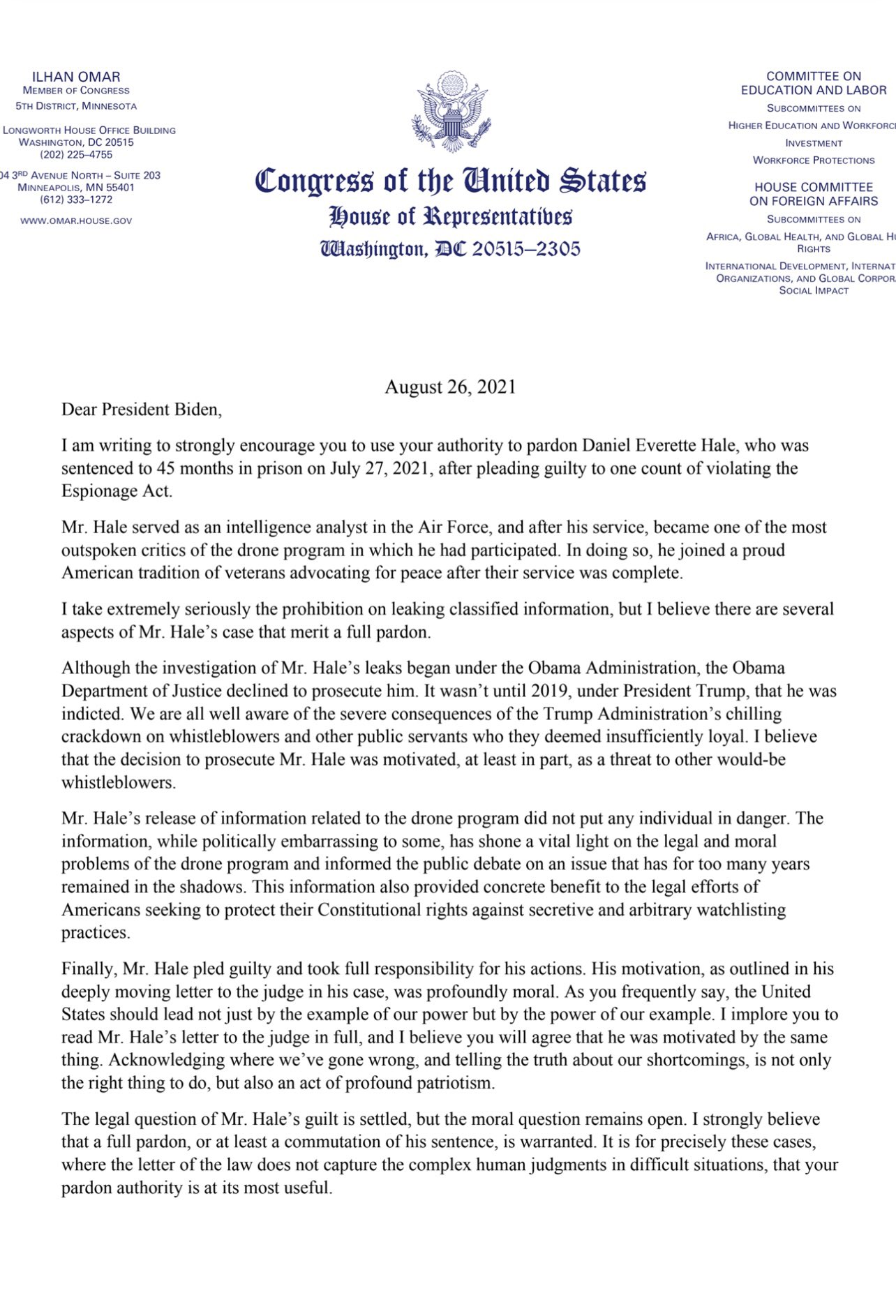 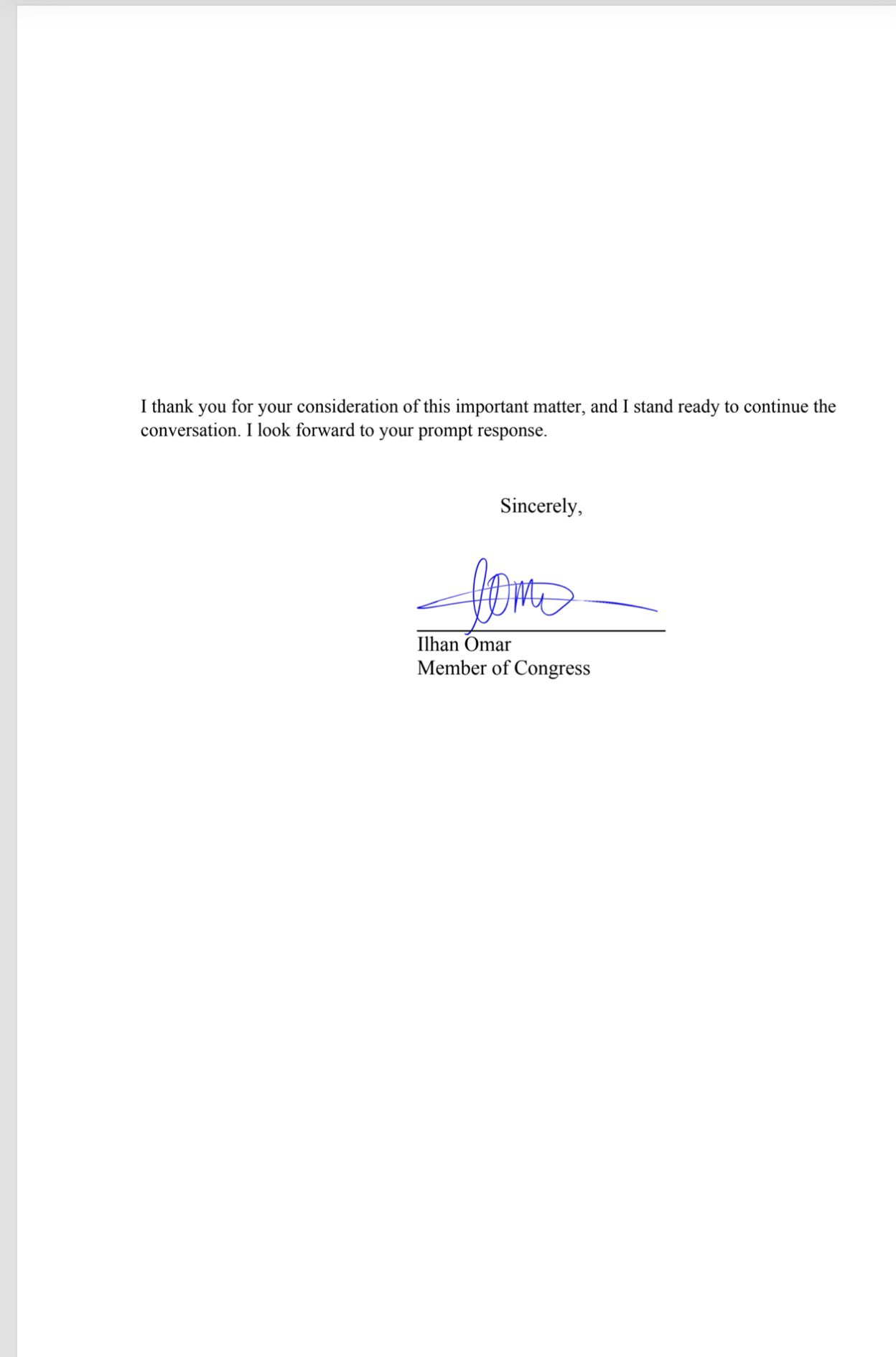 “I implore you to read Mr Hale’s letter to the judge in full, and I believe you will agree that he was motivated by the same thing,” she wrote.

Hale served in the US military during the first term of the Obama administration, a period that saw a rise in the number of drone strikes conducted by American forces.

Obama oversaw more strikes in his first year than his predecessor George W Bush carried out in his entire presidency. A total of 563 air strikes, mostly by drones, targeted Pakistan, Somalia, and Yemen during Obama’s eight years in office, compared with 57 under Bush, according to the Bureau of Investigative Journalism.

The former administration also carried out hundreds of strikes in Libya and Syria. The Council of Foreign Relations (CFR) estimates that 3,797 people were killed in drone strikes during Obama’s tenure, including 324 civilians, a number that is disputed.

The former Air Force intelligence analyst was one of at least eight alleged media sources to be criminally prosecuted – and the fifth to be charged under the Espionage Act – during the Trump administration. And this will be the first such case to be sentenced under the Biden administration.

Trump’s Department of Justice built upon the Obama administration’s notorious “War on Whistleblowers”.

The Justice Department during Trump’s presidency made every effort to prosecute leaks even more aggressively, reopening old cases, including Hale’s, and even creating a dedicated FBI counterintelligence unit to hunt down leakers. They placed government employees under increasingly heavy surveillance, with the intention of clamping down on their First Amendment right to free speech.

The Trump administration also obtained lengthier prison sentences for whistleblowers than under any previous president.

Omar noted in her letter that, while the investigation of Hale’s leaks began under Obama, “the Obama Department of Justice declined to prosecute him” and it was “under President Trump, that he was indicted”.

“We are all well aware of the severe consequences of the Trump administration’s chilling crackdown on whistleblowers and other public servants who they deemed insufficiently loyal,” she wrote. “I believe that the decision to prosecute Mr.  Hale was motivated, at least in part, as a threat to other would-be whistleblowers.”