CALIFORNIA (April 3, 2022)—Police in California are searching for at least one suspect in connection with a mass shooting early Sunday in downtown Sacramento that claimed six lives and left 10 other people injured.

Sacramento Police Chief Kathy Lester said at a news conference that police were patrolling the area at about 2 a.m. when they heard gunfire. When they arrived at the scene, they found a large crowd gathered on the street and six people dead. Another 10 either took themselves or were transported to hospitals. No information was given on their conditions.

Authorities don’t know whether one or more suspects were involved and are asking for the public’s help in identifying who is responsible. Lester did not give specifics on the type of gun used.

This is “a very complex and complicated scene,” she said. Lester issued a plea to the public, asking for witnesses or anyone with recordings of the incident to contact police.

UA News tweeted “New video from the shooting in downtown Sacramento, California appears to capture fully automatic gunfire. Up to 6 fatalities reported at this time.”

#BREAKING: New video from the shooting in downtown Sacramento, California appears to capture fully automatic gunfire. Up to 6 fatalities reported at this time. pic.twitter.com/oHUFea5vF6

Shortly after the shooting, video was posted on Twitter that showed people running through the street amid the sound of rapid gunfire. Video showed multiple ambulances at the scene.

Residents were asked to avoid the area, which is packed with restaurants and bars that leads to the Golden One Center, where the Sacramento Kings play basketball.

Berry Accius, a community activist, said he came to the scene shortly after the shooting happened.

“The first thing I saw was like victims. I saw a young girl with a whole bunch of blood in her body, a girl taking off glass from her, a young girl screaming saying, ‘They killed my sister.’ A mother running up, ‘Where’s my son, has my son been shot?’“ he said.

Kay Harris, 32, said she was asleep when one of her family members called to say they thought her brother had been killed. She said she thought he was at London, a nightclub at 1009 10th Street.

Harris said she has been to the club a few times and described it as a place for “the younger crowd.”

Police have the streets around the club closed, with yellow police tape fluttering in the early morning breeze. She has spent the morning circling the block waiting for news.

“Very much so a senseless violent act,” she said.

The SAC Foundation released a letter which stated that at 2:04 AM, Sacramento Police and Fire Department were dispatched to 10th and K Street in Downtown Sacramento reports of shooting.” 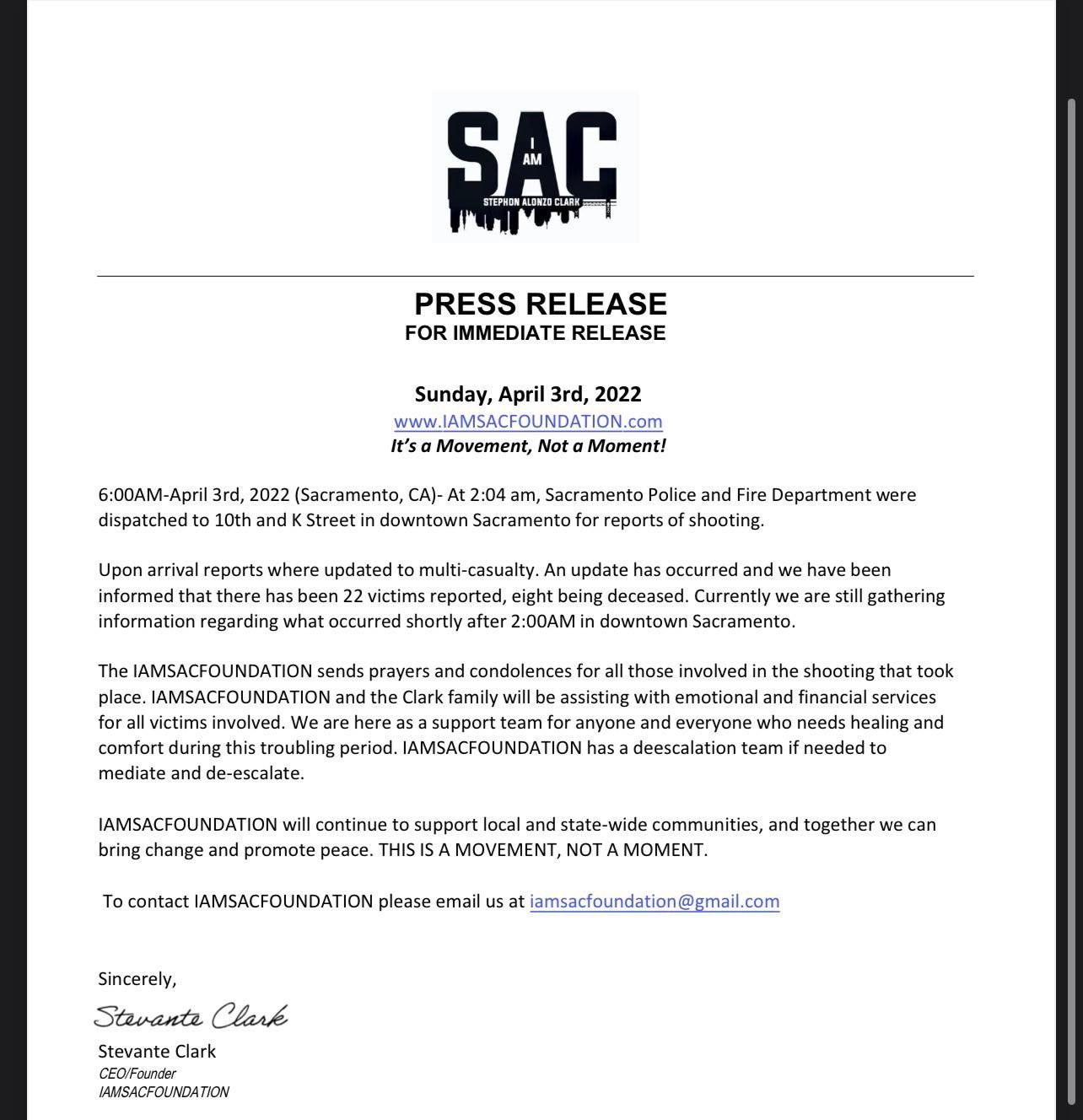