WASHINGTON, DC ((April 6, 2022)—A judge has issued the first outright acquittal of a defendant charged in the Capitol riot.

Following a two-day bench trial in U.S. District Court in Washington, New Mexico engineer Matthew Martin was acquitted Wednesday on four misdemeanor charges by U.S. District Court Judge Trevor McFadden. Martin claimed that he thought the police had allowed him into an entrance near the Capitol Rotunda on Jan. 6, 2021.

McFadden said that, based on video of the scene, that assertion was at least “plausible” and that prosecutors failed to prove the case beyond a reasonable doubt.

“People were streaming by and the officers made no attempt to stop the people,” said the judge, an appointee of President Donald Trump.

Prosecutors argued that broken windows and blaring alarms should have alerted Martin that he did not have permission to enter, but McFadden said the sheer size of the crowd coupled with the conduct of the police undermined that evidence. 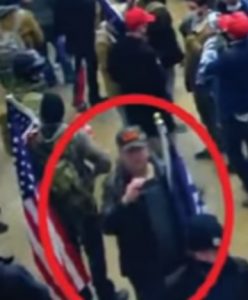 The ruling is a blow to the Justice Department and seems likely to elevate similar defenses from hundreds of other members of the mob who have claimed that they didn’t know they weren’t permitted inside the Capitol and believed that police officers had approved their presence.

Martin, who became the first Jan. 6 defendant to testify in his own defense, said he believed that an officer waved him into the Rotunda lobby at about 3 p.m. that day.

McFadden said that he did not believe that, but that the way the officer briefly interrupted the flow of people and then stepped back to allow it to resume could have given Martin that impression.

“I do think the defendant reasonably believed the officers allowed him into the Capitol,” the judge said.

McFadden stressed that he wasn’t criticizing the officers, who he said “were grossly outnumbered at that point.”

“I think they acted responsibly and reasonably throughout,” the judge said.

However, the verdict could be viewed as a message from McFadden to prosecutors that pursuing criminal charges against nearly every demonstrator who entered the Capitol on Jan. 6 was unwise and that resources should have been trained more intensely on those accused of violence or of conspiring to block the electoral vote count.

McFadden called Martin’s conduct “about as minimal and not serious as I can imagine” among Jan. 6 defendants.

The judge said that after Martin went inside, he generally milled around and stayed away from areas in the Rotunda where some demonstrators were taunting and skirmishing with police.

“He seemed quite quiet and orderly,” McFadden said. “He did not shout. He did not raise his flag.”

McFadden also said that while Martin was in the Capitol, he spent much of the time making videos with his phone, which the judge said wasn’t much different than what members of the press were doing.

McFadden called the first charge against Martin, knowingly entering in and remaining in a restricted area, a “close call.” The judge added: “But under our system of justice close calls go to the defendant.”

Martin didn’t show visible emotion in the courtroom as he listened to the verdicts on Wednesday afternoon, but told reporters outside the courthouse that he hoped to get his job back as an engineer for a government contractor in Los Alamos, N.M. He was fired after his employer learned of his involvement in the Jan. 6 events. Martin also lost a “Q” Energy Department security clearance that he held.

While on the stand on Tuesday, Martin said he had an idyllic experience on Jan. 6 attending Trump’s rally and later marching to the Capitol.

“It was a magical day in many ways,” he said.

Prosecutors urged the judge to treat Martin’s testimony with extreme skepticism, contending that he was evasive on the stand and had carefully crafted his answers to downplay his culpability. They noted that Martin and his attorney had attended a recent Jan. 6 trial McFadden presided over and studied how to craft a defense that might play to his previous rulings.

McFadden’s verdict is the latest in a series of rulings from the Trump-appointed judge that have disappointed prosecutors and broken sharply from colleagues on the U.S. District Court in Washington.

McFadden has repeatedly given short probation sentences to Jan. 6 defendants who the Justice Department has said deserved jail time. And he has questioned the merit of some of the misdemeanor cases that the department has brought against some nonviolent defendants in the Jan. 6 mob.

The ruling also highlights claims by dozens of Jan. 6 rioters that they believed they had permission to enter the Capitol because of the actions of the U.S. Capitol Police. Leaders there said the police department made decisions early in the day to focus on protecting lawmakers and securing the complex rather than arresting rioters, a decision that has resulted in the nationwide manhunt for hundreds of defendants that continues to this day.

A Capitol Police spokesperson declined to comment on McFadden’s decision.

“As a matter of policy, we can’t comment on any of these cases until they’re all done,” said the spokesperson, Tim Barber.

Capitol Police officials have also reviewed dozens of misconduct complaints against officers who were active during the breach of the Capitol, finding nearly all of them to lack merit. One officer, who has since retired, has been charged with attempting to help an alleged rioter, Jacob Hiles, evade investigators by encouraging him to delete incriminating Facebook posts. The officer, Michael Riley, is slated to go to trial later this year.

About 200 of roughly 800 people charged in connection with the Jan. 6 riot have pleaded guilty. Sentences have ranged from probation to more than five years in prison.

However, before Wednesday’s not-guilty verdicts for Martin, trials had been completed in only two other Jan. 6 cases. The first Jan. 6 defendant to go to trial, Texas militia member Guy Reffitt, was convicted by a Washington jury last month on all five felony counts he faced.

The second case, that of Couy Griffin, a New Mexico county commissioner and Cowboys for Trump founder, was also a bench trial before McFadden. Griffin faced two misdemeanor counts: entering a restricted area and disorderly conduct. McFadden found Griffin guilty of the trespassing charge but acquitted him of disorderly conduct.