Ukraine Update: Russia Admitted The Flagship Of Its Black Sea Fleet Was In Flames

UKRAINE (April 14, 2022)—Russia has admitted that the flagship of its Black Sea Fleet – the Moskva – was in flames on Thursday, with Ukraine claiming to have hit it with missiles.

Russia’s defence ministry said the Moskva missile cruiser had been badly damaged after ammunition on board was blown up by the fire.

In comments reported by Tass news agency, the ministry said: “As a result of a fire on the Moskva missile cruiser, ammunition detonated.”

The crew, believed to number around 500, were all saved, they added.

The statement did not say what had caused the initial fire, saying it was under investigation.

Ukrainian officials said the 12,500 tone ship had been hit by two anti-ship missiles.

There was no evidence provided for this, but Odesa’s governor Maksim Marchenko said on Telegram: “It has been confirmed that the missile cruiser Moscow today went exactly where it was sent by our border guards on Snake Island! 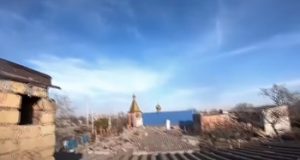 His comments about Snake Island refer to an incident earlier in the war – the day after Russia’s invasion began – when the Moskva was one of two Russian ships approaching the patch of land in the Black Sea.

The Russians ordered 13 Ukrainian soldiers defending the island to surrender but the Ukrainians responded over radio, telling the Moskva and its crew to “go f*** yourself”.

At first it was thought the Ukrainian soldiers had been killed but the country’s navy later said they had been captured alive by Russia.

• US officials are considering sending Secretary of State Antony Blinken or Defence Secretary Lloyd Austin to Ukraine’s capital Kyiv in a show of solidarity
• Russia said it will impose retaliatory sanctions on 398 members of the US House of Representatives and 87 Canadian senators, after the US targeted 328 members of Russia’s lower house
• The presidents of Poland, Lithuania, Latvia, and Estonia visited Kyiv to meet Ukrainian President Volodymyr Zelenskyy, with Lithuanian President Gitanas Nauseda saying: “The fight for Europe’s future is happening here”
• Finland and Sweden appeared to be edging closer to NATO membership, with Finland’s prime minister Sanna Marin saying the country had to be “prepared for all kinds of actions from Russia”
• Mr Zelenskyy said International Criminal Court prosecutor Karim Khan visited Bucha, where more than 400 bodies were found, on Wednesday. Russia has denied its troops committed any atrocities
• UN Secretary-General Antonio Guterres said there was no chance of a humanitarian ceasefire in Ukraine at the moment

It came as Ukraine warned that Russia was boosting its efforts in the south and east as it edged closer to taking control of Mariupol, which would be the first major Ukrainian city to fall.

Russia’s defence ministry said on Wednesday that 1,026 soldiers from Ukraine’s 36th Marine Brigade, including 162 officers, had surrendered in the southern city and that the port had come under Russian control.

Ukrainian soldiers trying to defend the strategically-important city have been fighting for weeks while running out of food, water, and ammunition.

Ukraine’s general staff confirmed Russian forces were attacking the port area but said there was no information about a surrender.