Prince Harry And Meghan To Visit The Queen

GREAT BRITAIN (April 15, 2022)–Prince Harry and Meghan have flown to the UK to visit the Queen on their way to the Invictus Games in the Netherlands.

The Duke and Duchess of Sussex, who had not been in the UK together since they quit as senior working royals more than two years ago, are also believed to have met Prince Charles.

It is understood Harry and Meghan were at Windsor Castle on Thursday.

Their spokesperson has confirmed they visited the Queen before their appearance at the Invictus Games in the Hague this weekend. 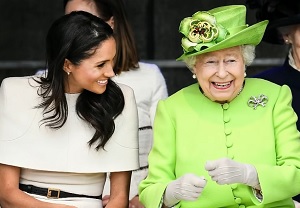 Earlier on Thursday, Buckingham Palace said the Queen will not attend the traditional Easter Sunday service at St George’s Chapel in Windsor.

Her Majesty, who is due to celebrate her 96th birthday next week, has been experiencing mobility issues.
Harry has visited the UK after being absent from the Duke of Edinburgh’s memorial service  in London last month.

A spokesperson for Harry confirmed earlier in March that he would miss the service for his grandfather, but that he hoped to visit the Queen soon.

The duke is bringing a claim against the Home Office after being told he would no longer be given the same degree of personal protective security when visiting from the US, despite offering to pay for it himself.

He and Meghan moved to California after stepping back from royal duties in January 2020.

Harry wants to bring his children, Archie, aged two, and 10-month-old Lilibet, to visit, but he and his family are “unable to return to his home” because it is too dangerous, his legal representative has said.