Mass graves have been found in a village near Mariupol, the city’s mayor, Vadym Boichenko, has said.

He confirmed reports “trenches” had been discovered in the village of Manhush, in the Donetsk region – and claimed Russian forces had been collecting the bodies in trucks and dumping them there.

Speaking via video link from an undisclosed location, he said Russian soldiers were “mopping up their crimes”.

“This is the second week in a row it’s totally closed. No one is allowed to enter. They are mopping up the place,” he said.

“They are hiding the crimes committed by the Russian Federation in Mariupol.

“According to our assessments, more than 20,000 civilians have been killed by enemy artillery and missile strikes in the streets of our city.

“We also have evidence from municipal services in the city. They’ve seen those bodies in person and now we see those bodies disappearing.

Mr Boichenko also said there were many incidents where residents had been “tortured and mistreated”.

UKRAINE (April 21, 2022)— Vladimir Putin cancelled the storming of the Azovstal steel plant where the last Mariupol troops remain and instead orders a blockade so that “a fly” cannot pass; Russian president hails “success” in the city but it is unclear if it has fallen.

What’s strategic reason for Putin halting the attack in Mariupol? And is he now concerned about civilian deaths?

“You don’t often see Putin getting involved in tactical details on the battlefield, so you have to look beyond what is actually going on here.

“It’s pretty evident this is a difficult nut to crack… and it’s a distraction from his main effort.

“The other thing is there are unconfirmed reports of thousands of civilians still in that area and any assault would highlight lots of civilian casualties.

“That hasn’t been an issue for Russia up until now, but as the world’s media is focused on Mariupol, I suspect it wouldn’t be helpful to his war aims.”

The “risk” in barricading instead of storming the plant, Air Vice-Marshal Bell says, is that in taking some Russian troops away, you make the remaining forces in Mariupol “static” – potentially giving the initiative to the Ukrainian forces.

The decision is “also a sign of Putin’s frustration with the Ukrainian tenacity”, Bell says – that having been told to surrender or die, the last remaining soldiers did not give in.

Russia has this afternoon extended a list of those who are banned from entering the country in response to sanctions imposed by the West.

A total of 29 American officials and journalists were placed on the list.

“These individuals are denied entry into the Russian Federation indefinitely,” the Russian foreign ministry said.

UK bans imports of caviar and high-end products from Russia

Britain has banned imports of caviar and other high-end products from Russia in the latest round of sanctions in the wake of the Ukrainian war.

The import ban is being extended to cover silver and wood products while tariffs on imports of diamonds and rubber from Russia and Belarus are being increased by 35%.

The latest was confirmed by the Department for International Trade this afternoon.

Anne-Marie Trevelyan, the UK’s international trade secretary, said: “We are taking every opportunity we can to ratchet the pressure to isolate the Russian economy and these further measures will tighten the screws, shutting down lucrative avenues of funding for (Vladimir) Putin’s war machine.”

Bodies of 1,000 civilians in morgues around Kyiv – reports

The bodies of 1,020 civilians are being stored in morgues around the Ukrainian capital of Kyiv, according to officials cited by the BBC.

The update comes after Russian troops withdrew from the areas around Kyiv following weeks of heavy bombardment on towns in the region.

Earlier, police officials said the bodies of nine civilians were found in the town of Borodyanka, some showing signs of torture.

Andriy Niebytoy, the head of police for the Kyiv region, said: “These people were killed by the occupiers and some show signs of torture. I want to emphasize that these people were civilians.

“The Russian military knowingly shot civilians who did not put up any resistance.”

President  Joe Biden  announced a new program which will allow Ukrainians fleeing the war with Russia to live in the US temporarily.

The scheme, named “Unite for Ukraine”, will allow Ukrainians with an American sponsor to live in the US for up to two years.

However, President Biden says this will not provide a clear path to citizenship.

The UK has put a similar scheme in place in recent weeks, allowing Britons to open their homes to Ukrainians fleeing the conflict – though the UN expressed concern it was being abused by single men.

So far, upwards of five million Ukrainians have fled the war with Russia, largely entering Poland, Slovakia, Hungary and Romania.

Vagit Alekperov, one of the world’s richest men, has quit as CEO of the second biggest oil company in Russia, Lukoil.

Lukoil confirmed that Mr. Alekperov would step down as a director and president of the company in a statement on Thursday.

It did not explain why Mr. Alekperov resigned or who would take over.

However, the move follows the UK’s decision to impose an asset freeze and travel ban on the Russian-Azerbaijani businessman last week, as part of sanctions imposed amid the war with Ukraine.

It also comes seven weeks after Lukoil broke ranks with Vladimir Putin and called for an end to the war.

A source told the Reuters news agency that Mr. Alekperov, who is worth an estimated $16bn, stepped down to protect the operations of Lukoil.

Biden confirms $800 million military aid for Ukraine, and says it is ‘questionable’ whether Mariupol in Russian hands

President Joe Biden has confirmed the US will provide another $800m in military aid for Ukraine, including “dozens of howitzers, ammunition, drones and heavy artillery”.

Speaking this afternoon, he said the US is sending weapons “directly to the front lines of freedom”, as the war with Russia waged on for a 57th day.

President Biden described the battle of Kyiv as a “historic victory” for Ukrainians, who were able to retain control of the capital as Russia bombarded the outskirts.

However, he said now is the time to accelerate assistance to Ukraine, including $500m in direct economic aid to the Ukrainian government.

Turning to the situation in Mariupol, President Biden said it is “questionable” whether Vladimir Putin is in control of the besieged city.

He described the upcoming days of war as a “critical window” as Russia advances in the east, in the next stage of the devastating conflict.

Meanwhile, he announced a ban on Russian-linked ships arriving in the US.

President Biden added: “No ship that sails under the Russian flag, or that is owned or operated by Russian interests, will be able to dock in a US port or access our shores. None, none.”

This would be the latest bid by Western allies to increase pressure on Russia over the invasion of Ukraine, which has reached a 57th day.

More news now from Mariupol, where upwards of 120,000 people are understood to remain trapped.

The city’s mayor Vadym Boichenko told a news briefing in the last hour that around 200 people are still awaiting evacuation, but no buses have arrived.

He added that at least 80 people were able to leave the city on Wednesday.

Earlier, Ukrainian President Volodymyr Zelenskyy said tens of thousands of civilians have been blocked from leaving the besieged southern city.

Mr. Boichenko said it is impossible to confirm exactly how many civilians are inside the Azovstal steel plant, but this number is thought to be between 300 and 1,000.

He added it is unlikely there will be evacuations from the site today.

Vladimir Putin has ordered the Russian military to cancel plans to storm the Mariupol steel plant, where the last remaining Ukrainian troops are holed up.

Instead, he wants it to be securely blockaded so that even “a fly” cannot pass unnoticed.

Mr Putin has said Russia guarantees the lives of those who leave the facility and that they will be treated with respect.

Ukrainian President Volodymyr Zelenskyy has been speaking this afternoon, after Russia claimed its forces have “liberated” Mariupol.

Zelenskyy said that 120,000 civilians have been blocked from leaving the besieged southern city on Thursday.

The city has faced the worst of Russian bombardment since the war with Russia erupted in late February, with thousands of people feared dead.

Countless others have been left without access to food and running water, with electricity supplies and internet connections cut off for weeks.

Zelenskyy said Ukraine has “offered all options” to Russia to aid the safe passage of troops and civilians away from Mariupol.

However, he said he is still awaiting Russia’s response.

Earlier, Russia’s defense minister Sergei Shoigu said Moscow controls much of Mariupol, but Ukrainian troops remain in a part of it.

The remnants of the city’s Ukrainian defense forces are holed up in underground bunkers at the Azovstal steel plant, alongside an estimated 1,000 civilians.

“Our forces in Mariupol are extremely exhausted after over 50 days in fierce urban combat, and we just can’t spend even more time and resources to zerg rush this 5-km wide steel plant turned into a giant fortress.”

The map below details the location of the steel works in Mariupol: 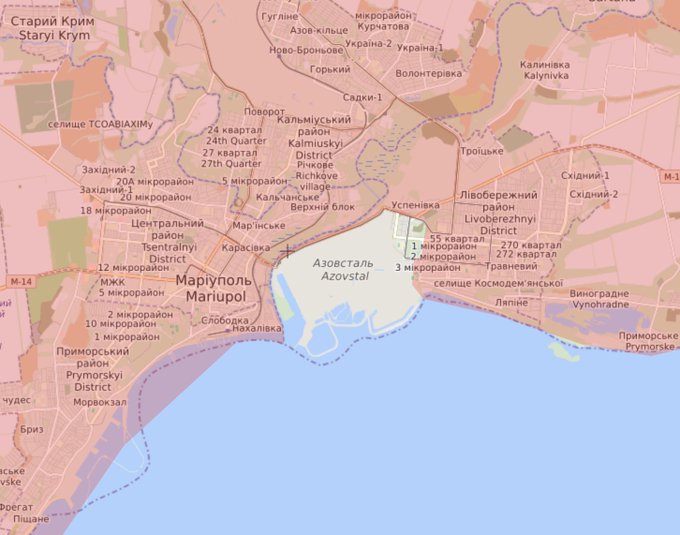 The latest data from the International Organisation for Migration found that 600,000 people were internally displaced in Ukraine at the start of April.

The latest data, for 1 April to 17 April, brings the total number to 7.7 million since the start of the war with Russia in late February.

This means around 17% of the Ukrainian population is displaced within the country. The majority of these – 60% – are women.

More than half of these people have reported a lack of access to food.

The majority of those to leave Ukraine have entered Poland, with others fleeing to Slovakia, Hungary, Romania and Moldova.

Mass graves have been found in a village near Mariupol, the city’s mayor, Vadym Boichenko, has said.

He confirmed reports “trenches” had been discovered in the village of Manhush, in the Donetsk region – and claimed Russian forces had been collecting the bodies in trucks and dumping them there.

Speaking via video link from an undisclosed location, he said Russian soldiers were “mopping up their crimes”.

“This is the second week in a row it’s totally closed. No one is allowed to enter. They are mopping up the place,” he said.

“They are hiding the crimes committed by the Russian Federation in Mariupol.

“According to our assessments, more than 20,000 civilians have been killed by enemy artillery and missile strikes in the streets of our city.

“We also have evidence from municipal services in the city. They’ve seen those bodies in person and now we see those bodies disappearing.

Mr.  Boichenko also said there were many incidents where residents had been “tortured and mistreated”.