The shooter injured several Edmund Burke School and one man, two women and a 12-year-old girl were shot near the intersection of Connecticut Avenue and Van Ness Street NW at 3:20 p.m., according to MPD Assistant Chief Stuart Emerman. The man, one of the women and the girl were taken to the hospital for treatment; the two adults are in stable but critical condition, while the girl has minor injuries, Emerman said. The fourth victim, a woman in her 60s, had what was  described as a graze wound and was treated on scene.

“At this time, based upon the things we have seen on social media, based upon the information we are investigating, we are seeking a person of interest that we would like to speak with. That individual’s name has come to light as Raymond Spencer. He is a 23-year-old male,” Emerman said at a news briefing earlier Friday.

The D.C. Police said Raymond Spencer is no longer a person of interest.  Spencer  of Fairfax, Virginia “took his life” in a fifth-floor apartment located in the area of Connecticut Avenue.

“The suspect that we believe is responsible for this is now deceased,” said Contee, who declined to name the suspect pending notification of next of kin. “We believe that the suspect took his own life as MPD members were entering or breaching the apartment where the suspect was located.”

“This was very much a sniper-type setup with a tripod, and this person, obviously, his intent was to kill and hurt members of our community,” Contee said.

Six firearms, including long guns,  and multiple rounds of ammunition were found inside the apartment. 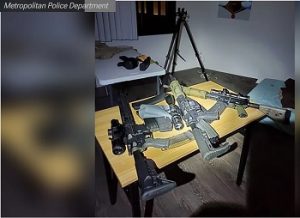 Motive unknown, but  the shooter used a high power weapon with a tripod, shooting at random from a nearby building.

The shooter is dead, but the city, community, parents and students have a long road to travel address violence, such as a shooting, across the nation’s capital.

Several citizens who live near the shooting location expressed how difficult it is to cope with crime in the city for a number of reasons.

The shooting near  the University of the District of Columbia (UDC) and more than 20 embassies  was unpredictable and uncontrollable.

The investigation continues around the unknown motive. And if the shooter acted alone.