UKRAINE (April 25, 2022)– Speaking almost exactly two months to the hour since Russian missiles started smashing into Ukrainian cities and Russian tanks rolled across the country’s borders, Mr. Zelenskyy did not try to hide his anger and contempt at the horror that has been inflicted on his people.

For Russia’s number one target, it was perhaps the only safe place to meet the world’s media.

Ukraine’s president emerged, feet-first, walking down a moving escalator on to the platform of an underground railway station, deep beneath the streets of Kyiv, flanked by soldiers.

In front of him were hundreds of journalists, sitting, standing, jostling for a good view.

Settling on a chair and interrupted by the odd passing train, Volodymyr Zelenskyy fielded questions for two hours on Russia’s war, the prospect of peace talks with Vladimir Putin and the need for the West to keep supplying weapons or risk Ukraine being destroyed. 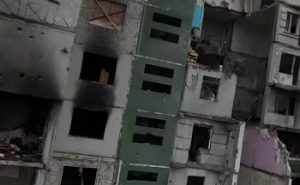 He also revealed – possibly to the surprise of the White House security team – that the US secretary of state and US defence secretary will be visiting the Ukrainian capital on Sunday, the highest-level trip by members of Joe Biden’s administration since the invasion.

The US president himself will apparently come as well once security conditions allow, Mr Zelenskyy added, though he warned all foreign leaders only to visit Kyiv if they have something to offer to help with the war effort.

“We are not a country for tragic selfies,” he said, pointedly.

Speaking almost exactly two months to the hour since Russian missiles started smashing into Ukrainian cities and Russian tanks rolled across the country’s borders, Mr Zelenskyy did not try to hide his anger and contempt at the horror that has been inflicted on his people.

He highlighted an attack against the port city of Odesa on Saturday, saying that a three-month-old baby was among eight people killed in the cruise missile strikes.

“The war started when this baby was one month old,” the president said, his voice heavy with emotion.

“Can you imagine what is happening? They are just bastards… I don’t have any other words for it, just bastards.”

Yet, he said he understood the need still to be willing to speak, face-to-face, with Mr Putin if there is a chance to find a diplomatic path to end the bloodshed.

“Regarding the meeting with the Russian President, I didn’t say ‘I want’ – I have to see the president if we plan to solve this issue through diplomacy,” he said, in response to a question from Sky News.

However, he cautioned separately that there would be no negotiations if Russia killed Ukrainian fighters in a stronghold of resistance in the besieged city of Mariupol.

The same would be true if Russia tried to hold fake referendums in territories its forces capture to manufacture the impression that people there want to be part of Russia, not Ukraine. This was a tactic used by Moscow in 2014 when it annexed Crimea.

“If our people are killed in Mariupol, if they announce a referendum – pseudo referendum – in the new pseudo republics, Ukraine will not take part in any negotiating processes,” Mr Zelenskyy said.

He thanked western allies, name-checking the United States and the UK, for arming his military, and said he believed this would continue, but spoke frankly about what would happen if the flow of western weapons dried up.

“They [western allies] have no alternative. We will not give them this opportunity. We have no other choice but to defend our land and get it back. What would the other choice be? It would be that we have no state, no people, this would be just a scorched land,” he told Sky News.

The Ukrainian leader had some critical words for the head of the United Nations over the chronology of a planned trip to the region this coming week to try to cultivate peace talks.

Antonio Guterres will meet Mr Putin in Moscow on Tuesday before travelling to Kyiv for talks with Mr Zelenskyy.

The Ukrainian president said he should have planned his trip the other way around.

“It is purely logical first to see… the consequences of the hostilities and with that experience go to the Russian Federation,” he said.

As for his own safety, Mr. Zelenskyy said he was not particularly worried but those around him were.

“I’m not very afraid – my bodyguards are very afraid, I’ll tell you frankly, and my family is terrified, to be completely honest.”

He chose – against the advice of western intelligence agencies – to stay in Kyiv when the war started in the early hours of 24 February, from where he gives nightly addresses to his country, instead of retreating to the west.

After the marathon media session was over, the president bade farewell and stood up. His security guards immediately moved in, providing a protective ring, as he walked back up the escalator and away.

The President is convinced that Ukraine has done everything possible to unite the countries of the European Union politically like never before. 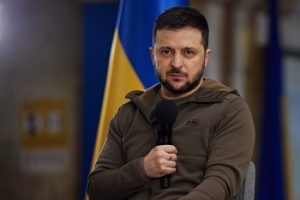 “We addressed the parliaments. And sometimes, may some European countries excuse me, behaved impudently. But understand: because we are at war and our people are dying, we can’t do otherwise – there is not enough time,” Volodymyr Zelenskyy said.

According to the Head of State, thanks to Ukraine, European countries have begun to understand the true meaning of NATO’s existence, as some European high-ranking officials have said in private conversations.

“Is the Alliance able to unite quickly and resist aggression?” said Volodymyr Zelenskyy.

He stressed that Ukraine is fighting for its existence and for peace, but it needs powerful weapons for this.

“Ukraine has done a lot to unite the world. And now that this union exists, weapons are needed. And this is the last union we need. Here, all countries need to become courageous people and courageous leaders together. And not only for us, not only for our victory, but also for themselves,” the President of Ukraine summed up.

Source: President of Ukraine and Sky News contributed to the article.