ISRAEL (April 26, 2022)—IRGC naval commander Tangsiri: “Today, the law of the world is the law of the jungle, and we have a duty to protect our interests from enemies.”

This would appear to be a message to the region that the IRGC navy, which consists of fast boats and some “mother ships” that can operate further from Iran, could now threaten to ship further from Iran. Iran has sent IRGC assets to the Red Sea in the past and there have been attacks on commercial tankers in recent years by mines and drones.

Iran has an official navy, but its IRGC navy is seen as the ideological outgrowth of the Iranian revolution, willing to be used to strike at the US, the Gulf, Israel and others. It is often called “Nedsa” as an abbreviation in media.

In the interview Tangsiri says that his units have increased training and combat readiness. “The all-encompassing combination of these capabilities constitutes a high and powerful capacity of dense and robust energy to carry out any communicative mission in a timely manner,” the article says.

“We are defining, updating and equipping our combat organization based on special mission strategies,” observes Tangsiri.

The article includes threats against the “arrogant” powers, usually a reference to the US and its allies in the region.

The IRGC naval commander says that his units are prepared to respond to attacks and that they now have new drones and missiles. 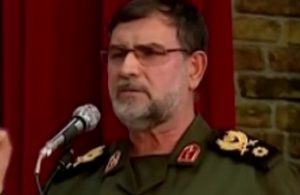 “Referring to Nedsa’s confrontation with the US Navy in the Persian Gulf and the Strait of Hormuz, the IRGC naval commander” provided several details, according to the article.

He also hinted at threats to Israel, referring to Israel as a form of “colonialism, looting, sedition and insecurity, and we do not consider its presence in this region legitimate.” He slammed the US for supporting “Zionism.”

Commander Tangsiri provided some insights into improvements that the IRGC claims it has made with the use of artificial intelligence and unmanned submarines.

“The IRGC navy has had many achievements underwater, and of course, not all of our capabilities have been demonstrated.”

Iran boasts of indigenous local production of new weapons and equipment, despite being under sanctions. It has equipped the IRGC fast boats with new drones, for instance.

The article claims that the IRGC navy now operates in “distant waters.” Last year Iran’s official navy sent two ships around the Cape of Good Hope and all the way to Russia.

Nedsa appears to want to show it can compete with the official navy’s abilities. “If we cannot defend our interests around the world, our funds will certainly fall prey to organized thieves and bandits,” Tangsiri said.

This appears to reference internal budget battles within the Iranian regime. The IRGC must prove itself at sea now and show the supreme leader and Iran’s president that it can make achievements.

This means that Iran does not feel bound by legal constraints on the use of mines and drones to target commercial ships. Yet it also claims to combat “lawlessness” at sea.

The IRGC can now draw on some 48,000 Iranians who live and work on the coasts and are linked to the Basij. That means Iran has press-ganged its fishermen into service. Each Iranian fishing vessel may now be an IRGC asset.

Naval mobilization is a popular defense force, providing a platform for people to participate in collective security.”

The IRGC navy also claims to help local villages and deal with disasters, such as flooding and it claims to combat things like illegal trawling.