GDP Report: US Economy Contracted By 1.4% In Q1 While Inflation Is Running At A 40 Year High “Eerily Resembles Stagflation of the 1970s”

The Bureau of Economic Analysis (BEA) released its initial estimate of first-quarter U.S. gross domestic product (GDP) Thursday at 8:30 a.m. ET. Here were the main metrics from the report, compared to consensus data compiled by Bloomberg:

The GDP report will, as usual, serve as a backwards-looking overview of growth, capturing the January-through-March period. However, the metric is still an important indicator of the momentum the U.S. economy maintained at the start of this year — especially as some pundits now brace for the possibility of a recession in the near to medium term.
Senator Chuck Grassley said in a tweet “Recent economic news that the economy contracted by 1.4% in Q1 while inflation is running at a 40 yr high eerily resembles stagflation of the 1970s. If Democrats reckless tax & spend agenda wasn’t dead before it ought 2b dead now”

And indeed, some of the points used to bolster the case for a downturn likely weighed on the pace of growth in the first quarter. Inflation has run at its hottest rate since the early 1980s, pressuring consumers’ propensity to spend. Plus, the Russia-Ukraine war has hit global supply chains that had yet to recover from the pandemic. More recently, a widespread COVID-19 outbreak that ramped up in China last month has also threatened to further hit supply chains and growth.

These myriad concerns will likely manifest in Thursday’s GDP report as drags from trade, or “net exports,” and inventories. Net exports have dragged on GDP for the past six consecutive quarters, and will likely do so for a seventh in the first quarter of 2022.

The U.S. goods trade deficit raced to a record high in March at more than $125 billion. Imports, which subtract from headline GDP, reached an all-time high and far outpaced exports. And though inventories rose in March, slowing inventory growth earlier in the quarter while supply chain challenges lingered is expected to ultimately pull down Q1 GDP. 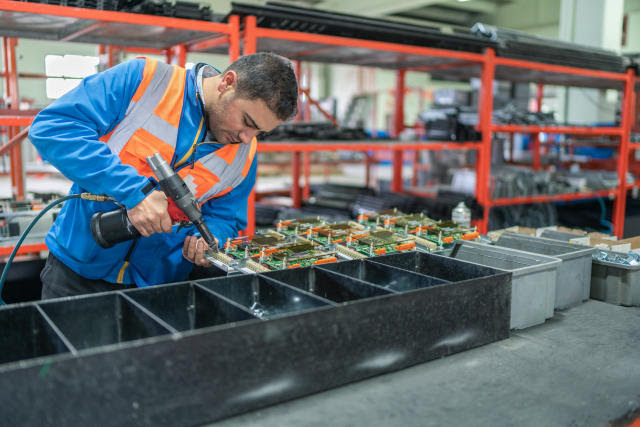 “The primary driver of the slowdown is the large reversal in inventory accumulation, which we project to have subtracted two percentage points off headline GDP growth,” Sam Bullard, senior economist at Wells Fargo Corporate & Investment Banking, wrote in a note. “Net exports should also act as a drag on top-line growth, slicing off 0.6 percentage points.”

“On the positive side, we look for growth in both consumer spending and business investment to have picked up last quarter, an encouraging sign,” he added.

Consumer spending, which comprises about two-thirds of domestic activity, is expected to still provide a positive contribution to first-quarter GDP. Though spending slowed in the Commerce Department’s monthly retail sales reports, a rotation from goods to services spending during the pandemic recovery and still-resilient consumer savings levels have largely helped buoy consumption.

“Overall, the core orders and shipments data are signaling positive momentum in business investment and equipment spending,” Rubeela Farooqi, chief U.S. economist for High Frequency Economics, wrote in a note on Tuesday. “However, there is downside risk to the manufacturing sector from the Ukraine war. Lockdowns in China are also likely to further strain supply networks and exacerbate shortages.”