WASHINGTON, D.C. (May 3, 2022)—The U.S. Supreme Court has provisionally voted to overturn Roe v Wade, the landmark ruling that legalized abortion nationwide in America, according to a draft opinion reported on by Politico.

U.S. Senator John Kenndy (R-NO) “nobody in their right mind believes that, in 1787, the drafters of the Constitution intended to include the right to an abortion.”

In what appeared to be a stunning and unprecedented leak, Politico said on Monday evening it had obtained an initial majority opinion written by Justice Samuel Alito and circulated in the court on 10 February. 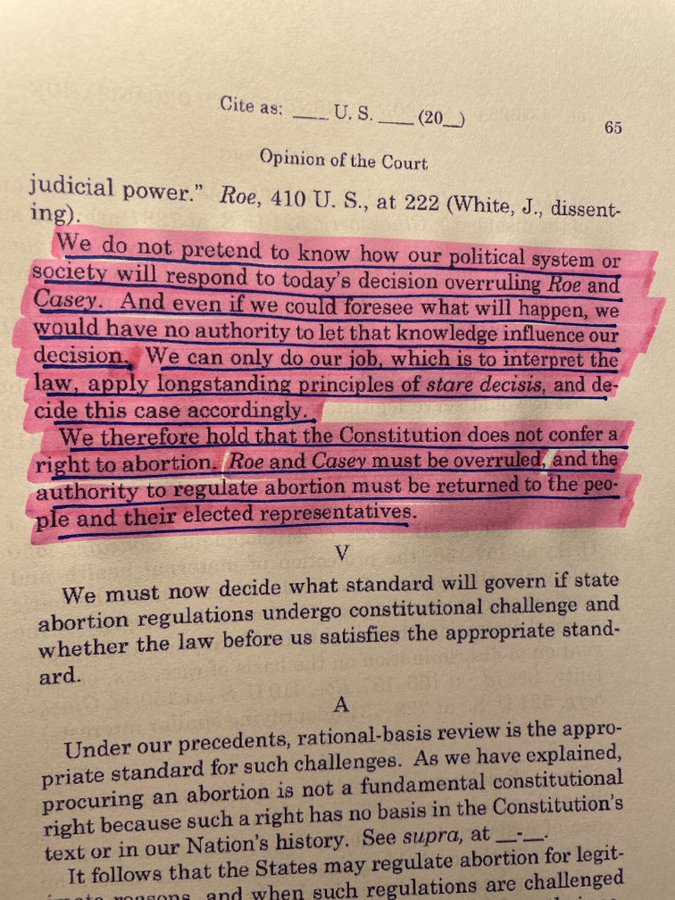 The opinion strikes down Roe v Wade, the court’s 1973 ruling that enshrined the constitutional right to abortion, and a subsequent 1992 decision – Planned Parenthood v Casey – that largely upheld that right.

Politico quoted Alito as saying: “Roe was egregiously wrong from the start. Its reasoning was exceptionally weak, and the decision has had damaging consequences. And far from bringing about a national settlement of the abortion issue, Roe and Casey have enflamed debate and deepened division.”

The justice adds: “We hold that Roe and Casey must be overruled. It is time to heed the constitution and return the issue of abortion to the people’s elected representatives.”

Four of the other Republican-appointed justices – Clarence Thomas, Neil Gorsuch, Brett Kavanaugh and Amy Coney Barrett – voted with Alito in the conference held among the justices, the article added.

But if, as expected, it is adopted, the decision would rule in favour of Mississippi in a highly consequential case about that state’s attempt to ban most abortions after 15 weeks of pregnancy. That would sound the death knell for the half-century guarantee of nationwide protection of reproductive rights and allow each state to decide whether to restrict or ban abortion.

Several Republican-led states have already passed highly restrictive abortion laws in anticipation of such a ruling by the supreme court which, thanks to three appointments by Donald Trump, now has a 6-3 conservative majority.

Politico said it received a copy of the draft opinion from a person familiar with the court’s proceedings in the Mississippi case. The draft opinion runs 98 pages, including a 31-page appendix of historical state abortion laws, and includes 118 footnotes.

The supreme court declined to confirm what would be the worst security breach in its history – regarding one of its most consequential rulings in decades that is sure to enflame America’s deep political divisions. After the Politico story broke, footage posted to social media showed a crowd of protesters gathering outside the supreme court late on Monday night, waving signs and chanting.

Neal Katyal, a former US acting solicitor general who has argued many cases before the supreme court, tweeted: “I’ve quickly scanned the draft opinion and it appears legitimate. This means there was a preliminary vote to fully overrule Roe v Wade and that a majority of the court agreed.”

He added: “There are lots of signals the opinion is legit. The length and depth of analysis, would be very hard to fake. It says it is written by Alito and definitely sounds like him. It’s 60+ pages long. If this is a deep fake, it would require a state actor or someone like that. I can’t imagine that.

A massive protest is forming in front of the Supreme Court in support of protecting women’s bodily autonomy. I’m proud our staff members are part. pic.twitter.com/I6MyzhoYex

“It’s possible the Court could pull back from this position, but this looks like they voted that way after the oral argument.”

Democrats condemned the leaked ruling. House Speaker Nancy Pelosi and Senate Majority Leader Chuck Schumer issued a statement saying overturning Roe v Wade would be “an abomination, one of the worst and most damaging decisions in modern history”.

“If the report is accurate, the Supreme Court is poised to inflict the greatest restriction of rights in the past fifty years – not just on women but on all Americans,” they said.

“Every Republican Senator who supported Senator McConnell and voted for Trump Justices pretending that this day would never come will now have to explain themselves to the American people.”

Christie Roberts, Democratic senatorial campaign executive director, said: “If this report is true, this Republican attack on abortion access, birth control and women’s health care has dramatically escalated the stakes of the 2022 election.

“At this critical moment, we must protect and expand Democrats’ Senate majority with the power to confirm or reject supreme court justices.”

“I am horrified by the apparent draft supreme court opinion leaked this evening … this should not be the supreme court’s final opinion when it comes to abortion rights,” said New York governor Kathy Hochul in a statement. The governor later added on Twitter: “I refuse to let my new granddaughter have to fight for the rights that generations have fought for & won, rights that she should be guaranteed.”

“This decision is a direct assault on the dignity, rights, & lives of women, not to mention decades of settled law,” said the former secretary of state Hillary Clinton. “It will kill and subjugate women even as a vast majority of Americans think abortion should be legal. What an utter disgrace.”

Senator Bernie Sanders tweeted the the news showed “Congress must pass legislation that codifies Roe v Wade as the law of the land in this country NOW”.

Reproductive rights and civil rights advocates also weighed in. Naral Pro-Choice America’s president Mini Timmaraju called it “the most ominous and alarming sign yet that our nation’s highest court is poised to overturn Roe v Wade”.

“If the supreme court does indeed issue a majority opinion along the lines of the leaked draft authored by Justice Alito, the shift in the tectonic plates of abortion rights will be as significant as any opinion the court has ever issued,” the ACLU said in a statement.

Republicans, however, were exultant. Madison Cawthorn, a congressman from North Carolina, wrote on Twitter: “Because of Donald J Trump, Roe v Wade will be overturned.”

Republican senator Tom Cotton condemned the apparent leak but applauded the vote, saying: “The Supreme Court & the DOJ must get to the bottom of this leak immediately using every investigative tool necessary. In the meantime, Roe was egregiously wrong from the beginning & I pray the Court follows the Constitution & allows the states to once again protect unborn life.”

Polling has shown that relatively few Americans want to see Roe overturned. In 2020, AP VoteCast found that 69% of voters in the presidential election said the supreme court should leave the Roe v Wade decision as is; just 29% said the court should overturn the decision.

Alito said the court can’t predict how the public might react and shouldn’t try. “We cannot allow our decisions to be affected by any extraneous influences such as concern about the public’s reaction to our work,” Alito wrote in the draft opinion, according to Politico.

Source: The Guardian.  Bee News Daily contributed to the article.