Job openings increased to 11.549 million in March, the Labor Department said in its Job Openings and Labor Turnover Summary (JOLTS) on Tuesday. Job openings had totaled 11.344 million in February, based on the revised monthly print. Consensus economists were looking for job openings to decline to 11.200 million for March, according to Bloomberg data.

The number of vacancies across the U.S. economy has held sharply above the number of hires, which were little changed month-on-month at 6.7 million in March. And the number of quits also edged up to a record high of 4.5 million, with the quits rate hovering little changed at 3.0%. cancies to help meet demand.

Leisure and hospitality employers added back 77,000 jobs in April, which while still the most of any industry group, was less than half the gain in payrolls from March. This was followed by professional and business services, with payrolls rising by 50,000 in April, and education and health services with gains of 48,000. In the goods-producing sector, payrolls grew on net in each of the manufacturing, construction and mining industries.

Plus, by company size, small business saw a marked downturn in employment last month. Small businesses, or those with 49 employees or fewer, shed a total of 120,000 payrolls last month, while medium and large businesses gained 46,000 and 321,000, respectively.

ADP’s monthly private jobs report comes, as usual, two days before the Labor Department releases its official jobs report. While ADP’s report typically does not serve as a perfect indicator of what to expect in the government-issued data due to differences in survey methodology, the print has often helped give a direction sense of job growth that took place during a given period.

Despite these discrepancies, the underlying trend amid the plethora of recent labor market data has been clear: the U.S. labor market remains extremely tight, with demand for workers far outstripping supply. In March, job openings raced to a record high of more than 11.5 million, while new hires were little changed at 6.7 million. And these vacancies have persisted even after months of payroll growth coming in well above pre-pandemic trends. 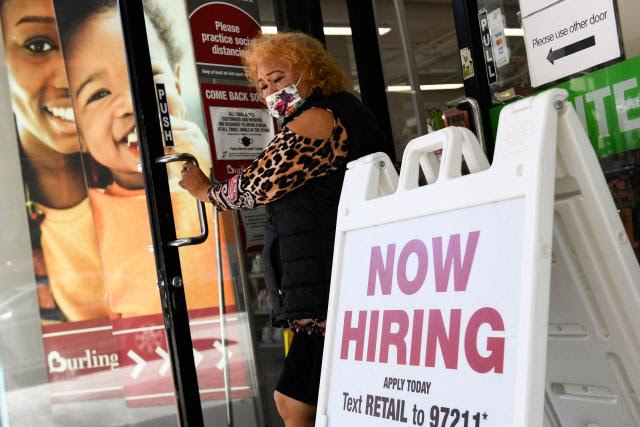 “For households, the trend in job growth is important,” Rubeela Farooqi, chief U.S. economist at High Frequency Economics, wrote in a note. “Recent labor market data suggest conditions are tight and showing no signs of deterioration. Layoffs are close to 50-year lows.”

“Rising nominal wages are supporting demand, enabling businesses to successfully pass on higher input and labor costs, without much pushback from consumers,” she added. “But we are watching for signs of a pullback, as rates move higher and prices remain elevated, or even continue rising. Not only will this affect the trajectory for growth, it will also limit companies’ ability to maintain margins and profitability, which in turn will impact investment and hiring decisions.”

In Friday’s government-issued jobs report, consensus economists are looking for non-farm payrolls to increase by 385,000 on net for April, with private payrolls rising by a slightly more robust 390,000 in total. This would follow non-farm payrolls growth of 431,000 in March. And the unemployment rate is expected to improve further to reach 3.5%, matching February 2020’s level for the lowest since 1969.