RUSSIAN (May 9, 2022)— Russian President Vladimir Putin said on Monday that Russia’s intervention in Ukraine had been necessary because the West was “preparing for the invasion of our land, including Crimea.”

Putin was speaking at the annual Victory Day parade on Moscow’s Red Square marking the anniversary of the Soviet Union’s victory over Nazi Germany in World War Two.

President Putin evoked the memory of Soviet heroism in World War Two to urge his army towards victory in Ukraine.

Addressing massed ranks of servicemen on Red Square on the 77th anniversary of victory over Nazi Germany, Putin condemned what he called external threats to weaken and split Russia, and repeated familiar arguments he had used to justify its invasion — that NATO was creating threats right next to its borders.

He directly addressed soldiers fighting in the Donbas region of eastern Ukraine which Russia has pledged to “liberate” from Kyiv.

“Defending the Motherland when its fate is being decided has always been sacred,” he said. “Today you are fighting for our
people in Donbas, for the security of Russia, our homeland.”

“The death of every soldier and officer is painful for us,” he said. “The state will do everything to take care of these families.”

He finished his speech with a rallying cry to the assembled soldiers: “For Russia, For Victory, Hurrah!”

Putin’s 11-minute speech on day 75 of the invasion offered no assessment of progress in the war and gave no indication of how long it might continue. Putin offered no evidence of an attack of the West during the speech.

He has repeatedly likened the war — which he casts as a battle against dangerous “Nazi”-inspired nationalists in Ukraine– to the challenge the Soviet Union faced when Adolf Hitler invaded in 1941.

At the same time, the head of the UN Children’s Fund (UNICEF), Catherine Russell tweeted out her strong condemnation.

“We do not yet know how many children might have been killed or injured in the reported bombing, but we fear this attack has just added to the hundreds of children who have already lost their lives in this war,” she said.

She echoed others in underscoring that schools must never be attacked or used for military purposes. 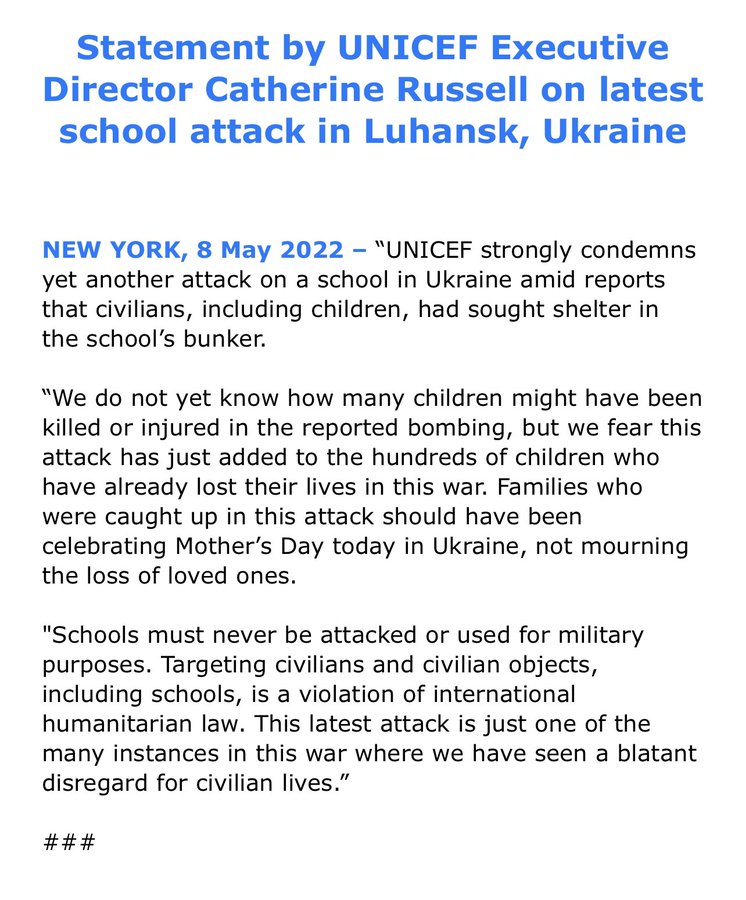 Mr. Guterres issued a second statement welcoming the arrival on Sunday of a new group of more than 170 civilians into Zaporizhzhia from the Azovstal steelworks and other areas of Mariupol.

The successful evacuation operation was coordinated by the UN and the International Committee of the Red Cross (ICRC).

“My thoughts are with them and all the people in Ukraine who are suffering in this war,” said the UN chief.

He went on to thank everyone involved in the “complex operation”, including the leaders in Kyiv and Moscow who ensured the necessary humanitarian pauses.

“I applaud the determination and courage of the UN and ICRC teams on the ground,” he said.

This latest safe passage operation brings the number of civilians who have been safely evacuated from the Azovstal steelworks and other areas of Mariupol to over 600.

“I urge the parties to the conflict to spare no effort to secure safe passage for all those wishing to leave, in any direction they choose, and for aid to reach people in need,” the Secretary-General concluded.

Meanwhile, the head of the World Health Organization (WHO), Tedros Adhanom Ghebreyesus, told journalists at a press conference in Kyiv yesterday that for the last two days he has been “deeply moved” by what he has seen and heard inside the country.

“My time here has affected me very personally. As someone…who grew up in a warzone myself, I understand only too well how the people of Ukraine feel – the worry for family and friends, the fear, the sense of loss and so on,” he said.

No stranger to the devastation of war, he lauded the “extraordinary resilience” of the Ukrainians.

“They have not given up [but] kept going, repairing essential services to stop the destruction [from] making a deeper hole in their lives,” said Tedros.

Since the war began in February, WHO has verified 200 attacks on health care in Ukraine.

The WHO chief spelled out that “these attacks must stop. Healthcare is never a target”.

He spoke of the bravery, humour and kindness that he witnessed amidst the suffering, along with stories of the “spontaneous, often ingenious ways” people have found to help and protect one another.

“Some of those I am talking about are our own WHO staff, who, although they have lost their homes, fear for their families, deal with daily uncertainty, and have kept working to support the health needs of the people of Ukraine,” Tedros said.

While the WHO team in Ukraine continues to work tirelessly to support the country and will do everything possible to back the Government in treating the injured, maintaining health services, and repairing the health system.

However, he pointed to “one medicine that WHO cannot deliver, and which Ukraine needs more than any other, and that is peace”.

“So, we continue to call on the Russian Federation to stop this war,” concluded the senior UN official.