Depp/Heard Trial: Heard Wrote Depp In A Letter She Wanted To “Rip” Him Apart”

VIRGINIA (May 17, 2022)—Amber Heard got briefly emotional on the stand — telling the court Johnny Depp can’t look at her because “he’s guilty.”

Heard attorney Elaine Bredehoft asked the actress why Depp has refused to meet her eyes since the start of the trial.

“Because he’s guilty,” Heard said while staring at the jury.

“He knows he’s lying,” she added, choking up slightly.

“Otherwise, why can’t he look at me?” Heard continued. “I survived that man and I’m here, and I can look at him.”

The dramatic moment appeared to refer to testimony from the actress on Monday that Depp promised her he would never look at her again after she filed for divorce from him in 2016. 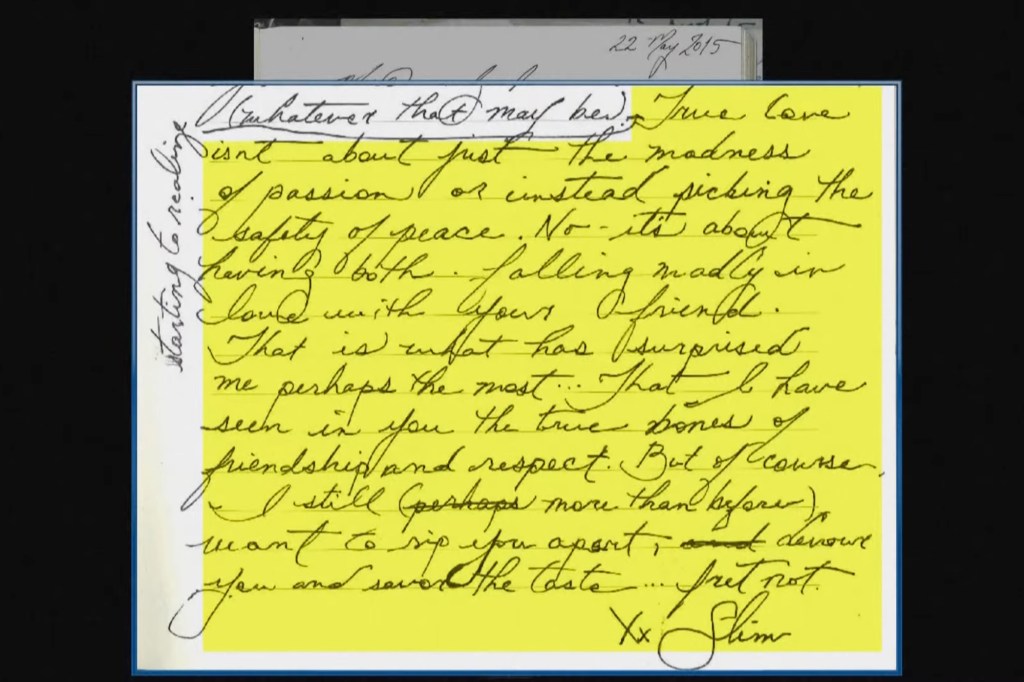 “Johnny Depp isn’t the only partner of yours that you’ve assaulted?” attorney Camille Vasquez asked.

In 2009, Heard was charged with domestic  violence against then-girlfriend van Ree — who later came out saying that the incident was a misunderstanding and that the charges against Heard were quickly dropped.

The jury got a glimpse of Heard’s online persona in the exhibit from March 26, 2021, which read, “Yes Mr. Waldman, I am wearing makeup on this occasion but on every occasion you will still be short.”

Heard’s comments were in response to Waldman saying her allegations that Depp abused her were a “hoax.”

Waldman’s remarks are the subject of Heard’s $100 million countersuit for defamation. The jury will decide the outcome of the case next week, after closing arguments set for May 27.

Johnny Depp’s lawyer on Tuesday grilled Amber Heard on her claim the actor sexually assaulted her with a liquor bottle — and showed passionate love notes in which she wrote she wanted to “rip” him apart.

Camille Vasquez, Depp’s attorney, launched the second day of Heard’s cross examination by asking the “Aquaman” actress about her claim that her then-husband violated her with a bottle of Maker’s Mark bourbon during a fight in March 2015.

She pressed Heard, 36, on why there were no medical records stemming from the alleged assault, despite the actress claiming that she sustained cuts to her feet and was bleeding.

Vasquez also pushed Heard on the progression of the fight. Heard has testified that Depp, 58, allegedly smashed a phone and cut off the tip of his finger, before pinning her down on a countertop and allegedly inserting the liquor bottle into her body.

The couple, who were newlyweds at the time, were living in Australia while Depp was shooting a fifth installment in the “Pirates of the Caribbean” franchise.

Heard pushed back, saying she can’t remember the exact sequence of events and has never claimed to do so.

“As I have always said, I don’t remember exactly what happened first, or the sequence,” she said.

Heard previously testified she feared the bottle inside her was broken. A photo taken after the alleged assault — which was displayed in court Tuesday — showed the bottle was intact.

Depp has maintained that he was the victim, and that he lost the tip of his middle finger when Heard hurled a vodka bottle at him. He then allegedly tried to hide from Heard as she went around the house banging on doors, trying to find him, according to his lawyer.

“You’re the one who assaulted someone with a bottle in Australia, isn’t that right, Ms. Heard?” Vasquez asked. “You weren’t scared of him at all, were you?”

Vasquez then confronted Heard about her writing a series of love notes to Depp in the months after the alleged assault.

“True love isn’t just about the madness of passion … it’s about your best friend,” she wrote in one missive to her husband. “I want to rip you apart.”

The handwritten letter was signed “Slim” — a nickname Depp used for his then-wife.

In another, Heard wrote to Depp that he was the “last person I ever meant to hurt” and “there is never a good enough reason to hurt you.”

Heard said she believed Depp had hit rock bottom after the Australia fight and was committed to sobriety. She has said most of the assaults occurred while Depp was under the influence of drugs or alcohol.

“When things were good, they were really good,” she said.

Depp is suing Heard for $50 million, claiming that she defamed him by writing an op-ed piece in the Washington Post, in which she described herself as “a public figure representing domestic abuse.”

Amber Heard’s letter to Johnny Deep:  Letter 1: A letter Heard wrote to Depp in which she said she wanted to “rip” him apart. and Letter 2 Reuters