LONDON (June 1, 2022)–no matter where you are in the United Kingdom, Canada  or in the United States you cannot escape the #PlatinumJubilee celebrations.  Here are some  events which have taken place and scheduled events  around London.

Excitement has been building on The Mall by Buckingham Palace this afternoon as members of the public and visitors from abroad prepare to join the celebrations of the Queen’s Platinum Jubilee, which kicks off tomorrow.

Fans attached flags to the barriers while some camped out as they patiently wait for the revelries to begin.

In the 1960s, a queen celebrated national and global firsts 👑

Platinum Pageant rehearsals have take place in London.  Early this week, he procession of the Gold State Coach wound through the streets accompanied by British and Commonwealth soldiers taking part in this Platinum Jubilee celebration 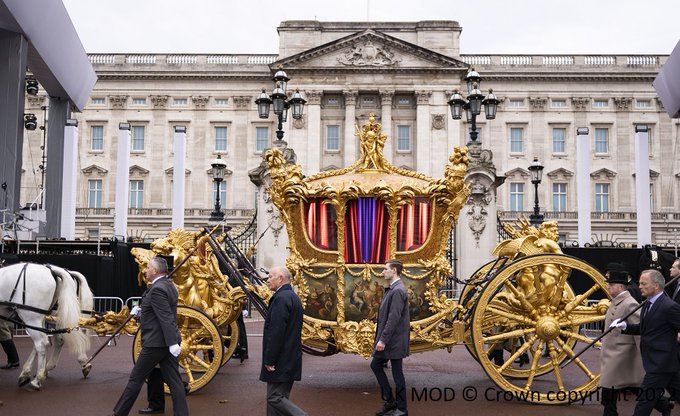 Gallery assistants have been pictured posing with a portrait of the Queen by Andy Warhol today.

The works, called “Queen Elizabeth II of the United Kingdom, from Reigning Queens (F. & S. 336) 1985”, was being snapped at a photo call before the artwork is due to be auctioned at Phillips in London later on.

Harry and Meghan get balcony moment after all*

New pictures show Harry and Meghan* greeting fans and passers-by from a cardboard, but actually quite realistic looking royal balcony by Tower Bridge in London.

The balcony was created by Ribena ahead of the Platinum Jubilee Weekend in a bid to (get free publicity and) give the couple their very own balcony moment after they didn’t make the cut on the Queen’s list.

They are famously the Queen’s favorite breed of dog – and numbers have reached a 30-year high to coincide with Her Majesty’s Platinum Jubilee.

There were 1,223 Pembroke Welsh corgis – to use their full title – registered last year, the Kennel Club said.

The club, which has the Queen as its patron, has also looked at numbers over the years.

In 1944 when Susan, the Queen’s first corgi was born, the breed jumped by 56% in popularity.

Numbers then rose steadily, peaking at almost 9,000 puppies in 1960, seven years after the Queen’s coronation.

The Kennel Club said advances in broadcasting – meaning viewers got to see the royal corgis during Her Majesty’s first televised Christmas address in 1957 – also helped to publicise the breed.

Further interest has been provided by Netflix drama The Crown.

Club spokesman Bill Lambert said: “The breed has certainly seen a boost in recent years, largely down it would seem to their starring roles in The Crown, but the Queen did play an integral part in introducing corgis to the public consciousness originally, so what a wonderful testament to her 70th year on the throne, to see her beloved breed having a resurgence in popularity.” 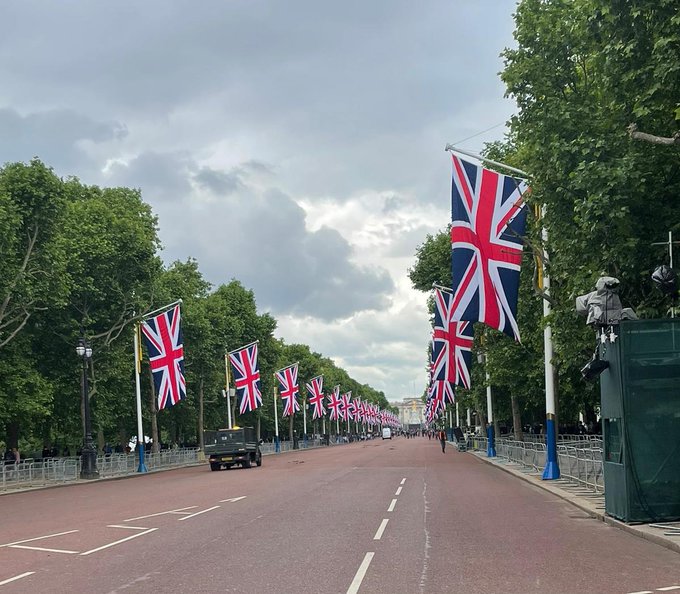 Members of the Royal Air Force (RAF) were pictured participating in the final preparations ahead of the Queen’s Platinum Jubilee pageant in Buckinghamshire this morning.

The Jubilee Pageant will take place in central London on Sunday, with a 3km carnival procession featuring a cast of thousands including puppets and celebrities and tributes to the seven decades of the Queen’s reign.

It will move down The Mall and past the palace.

Prince Andrew rides a horse on the Royal Estate in Windsor

Prince Andrew has been pictured in high spirits as he rode a horse on the Royal Estate in Windsor this morning.

It comes a day after an ITV News interview with Archbishop of Canterbury Justin Welby aired discussing the Duke of York.

Mr. Welby said Andrew is “seeking to make amends” after settling his sex abuse case and spoke of the importance of an “open and forgiving” society.

He added that the Queen was “fully entitled” to have been accompanied by Andrew at the memorial service for Prince Philip, the Archbishop of Canterbury has said.

There has been much discussion around how many, if any, events Andrew will take part in at his mother’s upcoming Platinum Jubilee celebrations.

Royal super fans were pictured beside their tents at the front of the crowd barriers on The Mall yesterday.

They were patiently waiting for the start of Britain’s Queen Elizabeth II’s Platinum Jubilee which will kick off tomorrow with The Queen’s Birthday Parade – Trooping the Color at 10am.

The Queen is expected to appear on the balcony of Buckingham Palace on Thursday as Trooping the Color is celebrated in London for the first time since the pandemic.

Thousands are expected to gather along the Mall to see the Royal Family as a weekend of events marking Her Majesty’s Platinum Jubilee begin.

Sky News takes a look back at some of the Queen’s most famous balcony moments – click the link below to check them out. 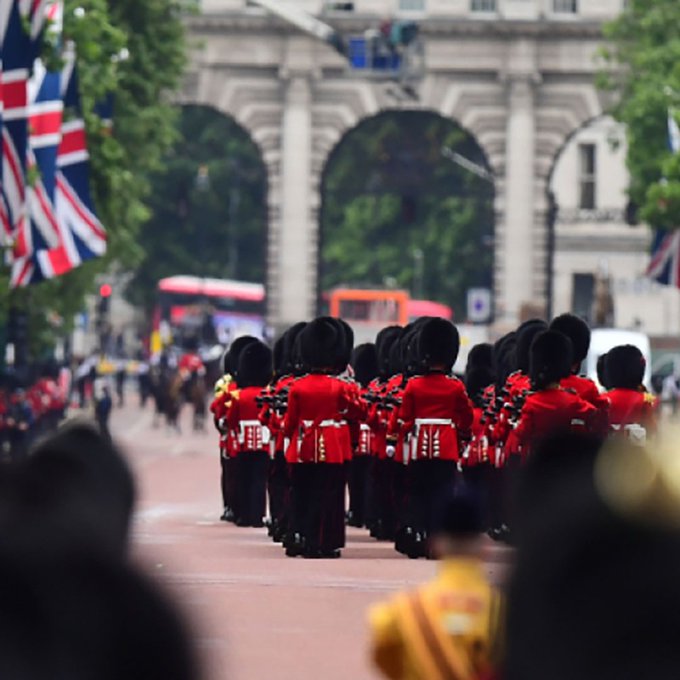 The Mall is ready for Jubilee celebrations

The Mall in central London, which looks towards Buckingham Palace and the Queen Victoria Memorial statue, is well and truly ready for the Platinum Jubilee celebrations this bank holiday weekend.

The road leading up to the palace is lined with Union flags and closed to traffic ahead of the revelries.

Princess Eugenie pays tribute to ‘grannie’ ahead of Jubilee celebrations

Princess Eugenie has paid a personal tribute to her “grannie” the Queen ahead of the Jubilee celebrations.

Referring to her son August, Eugenie wrote in The Spectator: “I think of my grannie and what she has stood for, for so many people and for our family during these 70 years.

“I’d love Augie to have her patience, her calmness and her kindness, while always being able to laugh at himself and keep a twinkle in his eye.”

She added: “Seventy years is really quite something, isn’t it?

“The Jubilee stands as a testimony to a woman who has transcended time and has been that constant rock for so many when the world can feel so fragile.”

The Prince of Wales is the Patron of The Queen’s Green Canopy, a tree planting initiative that was set up to mark Her Majesty’s Platinum Jubilee and which invites people from across the United Kingdom to ‘Plant a Tree for the Jubilee’.

🍃 Today marks the launch of @qgcanopy, a a unique, UK-wide tree planting initiative created to mark The Queen’s Platinum Jubilee in 2022.

📸 The Queen and The Prince of Wales with the first Jubilee tree, planted earlier this year. pic.twitter.com/f7XdrVhetI

The ‘Tree of Trees’ is the main Platinum Jubilee beacon. It stands on the Mall in London and is made up of 350 trees in containers bearing The Queen’s cypher. 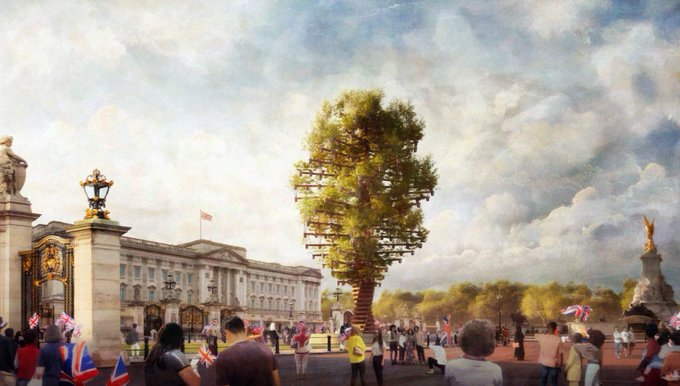 In celebration of the Platinum Jubilee, 70 British Embassies and High Commissions came together from around the world to provide recipes – many of which have been served during Royal visits – that are proudly British, inspired by local influences from the Embassy’s host country, or a fusion of the two. These recipes were collated into The Platinum Jubilee Cookbook with the foreword of the book provided by Their Royal Highnesses.

A close up of some of the intricate icing work on the Platinum Jubilee cake created by Patisserie Mark Bennett which has now been delivered to Buckingham Palace. 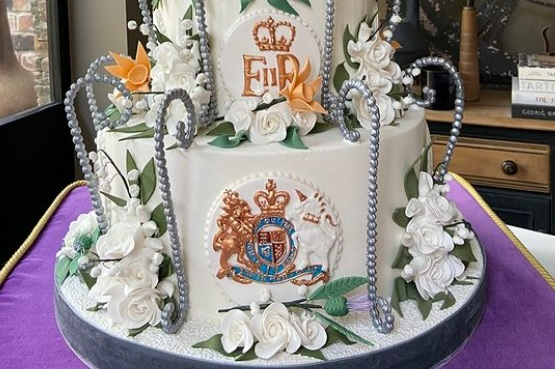 In May, The Duchess of Cornwall had the pleasure of announcing the winner of the Platinum Pudding competition. The judging panel, headed up by Dame Mary Berry and Monica Galetti, decided that Jemma Melvin’s Lemon Swiss Roll and Amaretti Trifle would be the official pudding for The Queen’s Platinum Jubilee, beating over 5,000 other desserts to the top.

Since 2013, The Duchess of Cornwall has been Patron of the Big Lunch, an annual event that aims to bring communities together over a shared meal. This year, The Big Jubilee Lunch forms part of the official Jubilee community celebrations with Their Royal Highnesses attending a lunch at the Oval Cricket Ground in South London.

Overseas, The Prince of Wales and The Duchess of Cornwall celebrated the Platinum Queen in Ireland in March and Canada in May. During both visits, Their Royal Highnesses met with local leaders, community groups and charities to learn more about the fantastic work they are doing to support their local communities.

Lighting takes place at 9.45pm on June 2nd to mark the the Platinum Jubilee. 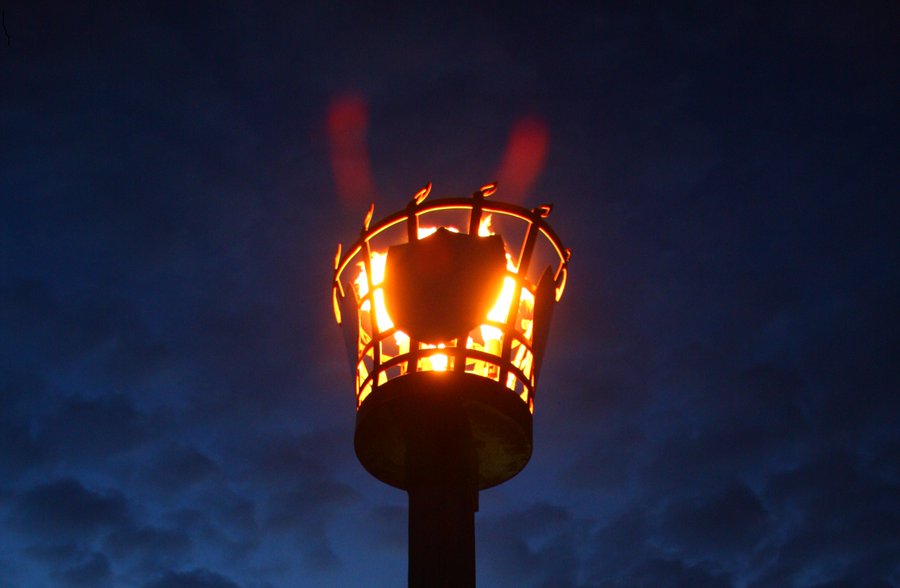 Source: The Prince of Wales and The Duchess of Cornwall  and Sky News contributed to the article.