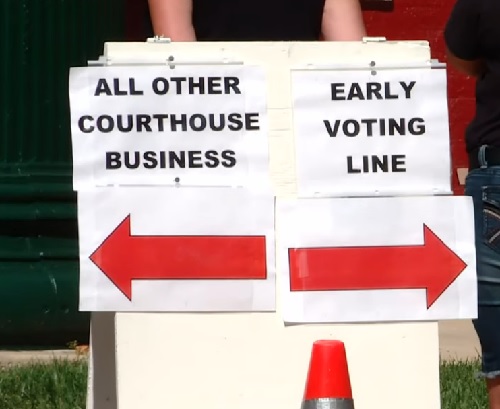 WASHINGTON, DC, October 17, 2022—For two months the Democrats chipped away at the Republicans’ lead in the battle for House control, helped by motivated abortion-rights voters and what turned out to be fleeting glimmers of optimism about the economy. But that momentum has stalled, at least for now, and the Republicans’ House lead has stabilized today at 224 seats to the Democrats’ 211. The Republicans’ lead had shrunk in the two previous model runs of September and August.

What’s behind this? Today’s views of the economy have gotten worse amid continuing inflation, a volatile stock market and — in a stark reversal from August — people are reporting gas prices are rising in their neighborhoods. And voters are feeling this personally: more now say their own financial situation is bad, and there’s more concern about saving and paying for things, compared to last month.

So, it’s becoming clear that so much of the closing weeks will be about motivating turnout, and for all the attention these elections get, many eligible voters simply will not participate. To that end, we’ll model a couple of scenarios that emerge from our data. 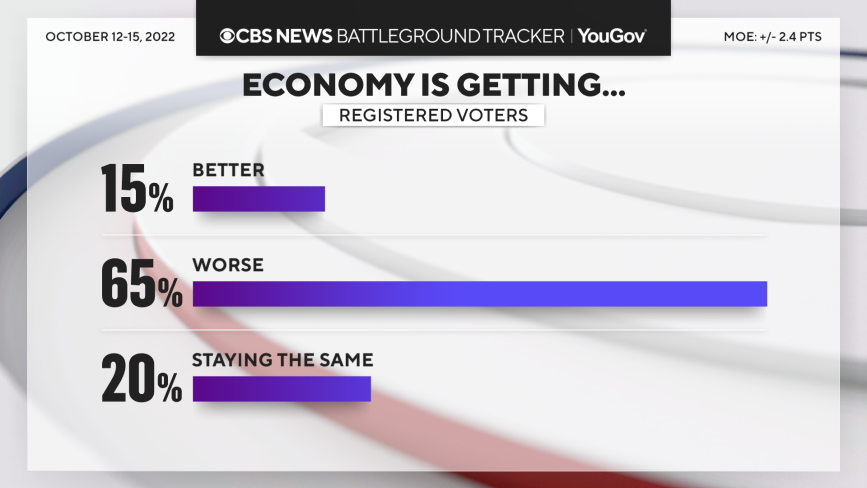 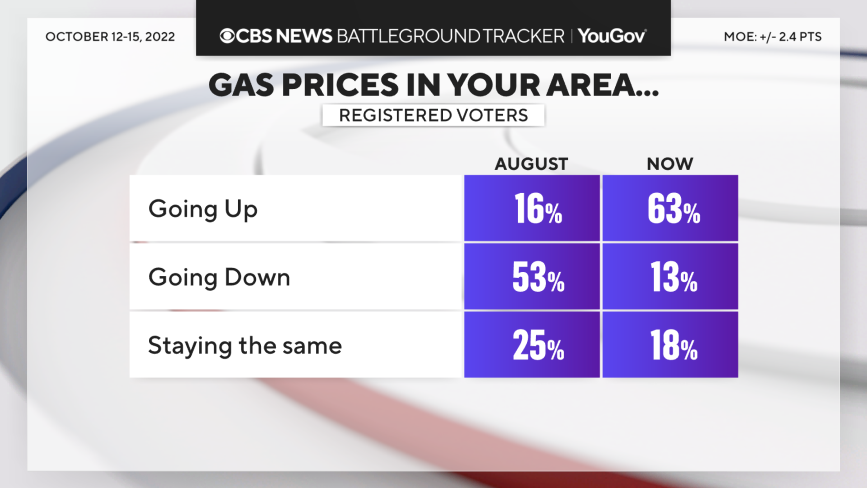 Why things have steadied

We wanted to understand just how voters assign blame — or reward — on the economy. For the Democrats, it brings a sobering look at how voters reason from the results they see before them.

By double digits, Democrats are still losing independents who report their personal financial situation is bad, and those for whom high prices have made their lives worse or more difficult.

Democratic policies are not the main reason people see for inflation — more pin blame on international forces and supply issues — but the party isn’t absolved either.

Two-thirds of voters report seeing gas prices go up. That isn’t helping Democrats: those who report increases are more apt to blame Democratic policies for it.

But as with much else today, even an empirical experience like the price of gas is reported through a political lens. Republicans are even more likely to say they’ve gone up than Democrats are. It’s true in every region of the county.

More voters feel the Democrats’ policies have been harmful rather than helpful to the economy, including independents. And two-thirds of registered voters overall think the Biden administration could be doing more to combat inflation. 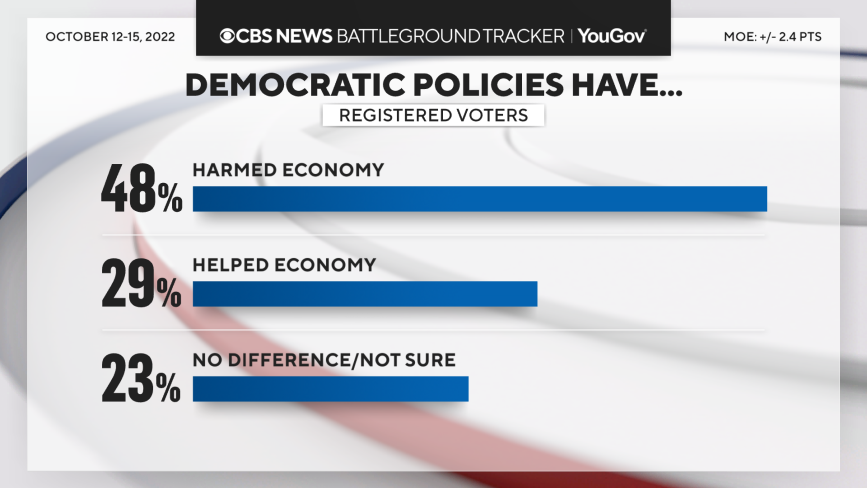 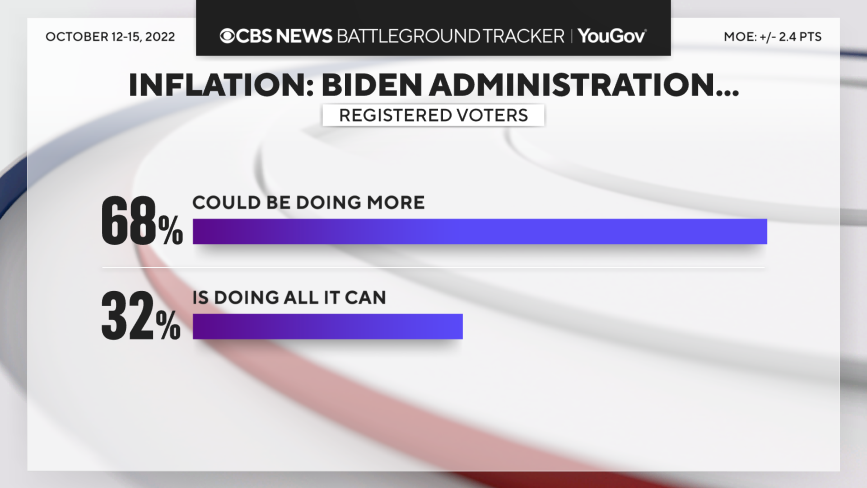 All this despite the fact that the job market is seen as good, and fewer are worried about their job situation than their ability to save money or about rising prices.

In all, fewer than half, 45% of voters, say Biden’s policies bear “a great deal” of responsibility for the current economy, but another quarter say “some.”

For context, U.S. presidents are always tied at least some to economic conditions, but they aren’t always determinative. For instance, in competitive congressional districts before the 2018 midterms, then-President Trump had a similar number of voters saying his policies were responsible for the economy. The economy was widely seen as good then, but Republicans lost the House by a wide margin anyway. 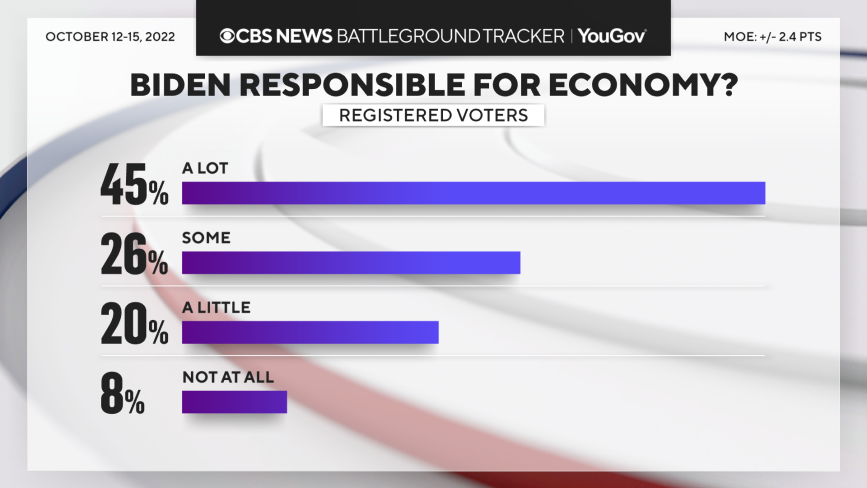 As Republicans continue to win economy-focused voters, the question arises: Why they haven’t they gained even more?

They do outpace the Democrats on having policies that would help the economy — but are also more likely seen as helping the wealthy, specifically, than the middle class. 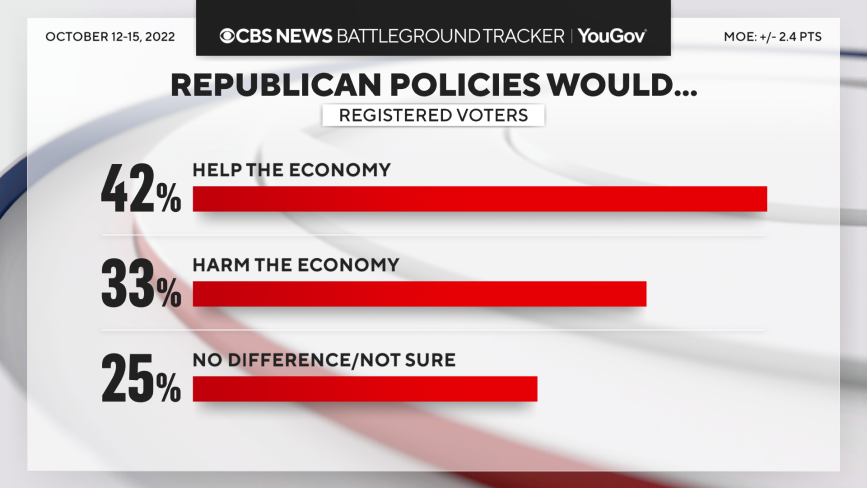 For the moment, it appears abortion is already factored in to the same extent it has been.

The issue brought the Democrats into contention in the face of all that economic news. It’s still critical, but it has not significantly expanded its importance since.

We’ve said for a while much of this contest is about who can definine what the election is about. The Democratic campaigns want it to be about abortion, and for so many voters it already is, but over the last month, Democrats haven’t grown the number of voters who see abortion as very important.

The percentage who say abortion is very important is actually a little lower now than last month. 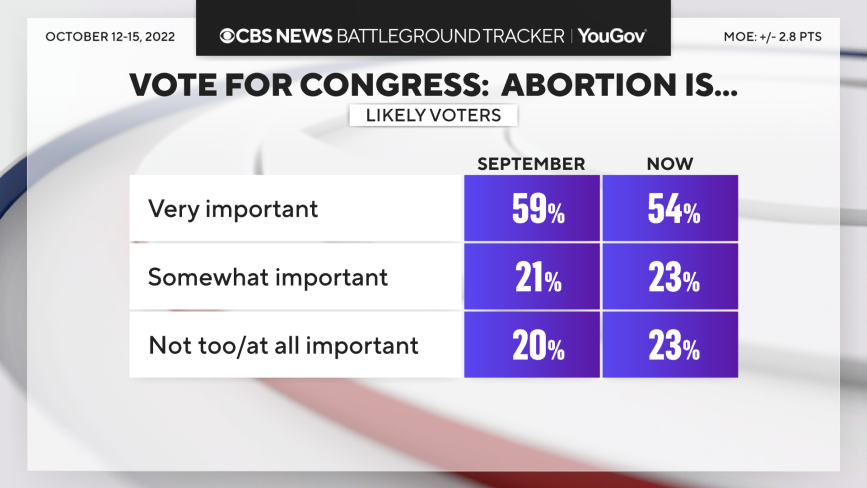 Democrats have managed to win even more of voters who already prioritize the issue, suggesting that part of their messaging is working. It’s just that they haven’t expanded the size of that group.

Whether or not that changes — or whether it can in the face of so much economic uncertainty — will probably be a key, determining factor of this contest.

Polarization and partisanship at play

And that, in turn, brings us to ideas involving polarization and partisanship.

Both parties are seen by a majority of voters as “extreme,” with more than eight in 10 in each party seeing the opposing party that way. Few on either side call the other party “reasonable.”

Only one in 10 voters who’ve picked a party in the race for the House say they’d even consider the other party — and those voters aren’t as likely to vote at all. That’s in line with the scant amount of crossover voting we’ve seen in recent elections.

And voters on each side say they won’t just be disappointed if the other side wins, but half say they will be angry. In the 2018 campaign, the prospect of losing consistently elicited more anger from Democrats than Republicans, foreshadowing that year’s blue wave. Now the parties are even on this, and the vast majority of voters on both sides say voting in this year’s midterms matters as much or more than in a presidential year.

Perhaps reflecting blame associated with the party in power, and heightened partisan division, those voting Republican this year place more importance on opposing Democratic policies than supporting Republican ones.

President Biden’s approval rating among likely voters is similar to what it was last month. It has ticked up among the broader group of registered voters — driven by voters under 45, who remain much less likely than older voters to say they’re voting in these midterms.

Scenarios: What happens if…

To better illustrate the range of possibilities that may lie ahead, given the uncertainty inherent in modeling support before an election, we use our data to explore political scenarios describing how things might unfold from here. One area of exploration — and cause of uncertainty — is turnout, or who will actually cast a ballot this year.

Among the many patterns we’ve observed, one is that younger people don’t seem quite as likely to turn out as they did in 2018. Voters under 45 make up just a quarter of likely voters in our baseline estimates above, because they are simply less likely to say they’ll turn out this year.

That said, this group did turn out in big numbers just four years ago, helping along a blue wave. And voting once makes you likelier to do it again.

So, suppose they do show up. Replicating 2018 turnout patterns would mean under-45 voters grow to about a third of the 2022 electorate. Combine that with voters’ current preferences and you get an estimate that puts Democrats ahead in about 219 seats. That would basically make House control a toss-up and mean Democrats have a chance to narrowly save their majority. (Republicans would still net a few seats in this scenario.) 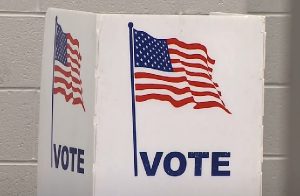