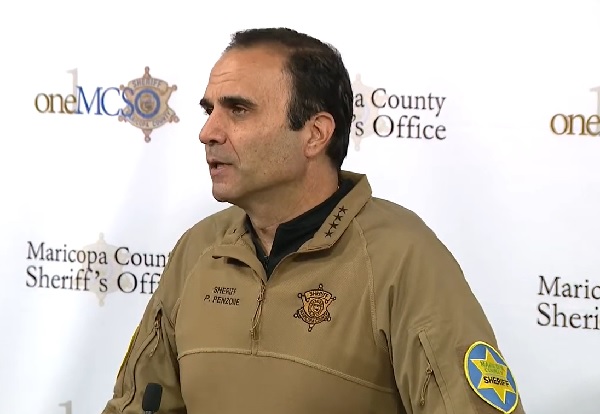 PHOENIX, AZ, October 25, 2022 — The sheriff in metropolitan Phoenix said Monday he’s stepped up security around ballot drop boxes after a series of incidents involving people keeping watch on the boxes and taking video of voters after they were apparently inspired by lies about the 2020 election.

On Friday, deputies responded when two masked people carrying guns and wearing bulletproof vests showed up at a drop box in Mesa, a Phoenix suburb. The secretary of state said her office has received six cases of potential voter intimidation to the state attorney general and the U.S. Department of Justice, as well as a threatening email sent to the state elections director.

People watching the boxes and voters showing up to vote have covered their license plates, according to photos shared on social media.

“Every day I’m dedicating a considerable amount of resources just to give people confidence that they can cast a vote safely, and that is absurd,” Maricopa County Sheriff Paul Penzone said during a news conference. Penzone said his office has referred two incidents to county prosecutors for potential criminal charges.

Arizona, the state with the smallest margin of victory for President Joe Biden two years ago, now has some of the highest-profile midterm races in the country, including a Senate race that could tip the balance of power in Congress.

“Uninformed vigilantes outside Maricopa County’s drop boxes are not increasing election integrity,” Stephen Richer, the Maricopa County recorder, and Bill Gates, chairman of the county board of supervisors, said in a joint statement over the weekend. “Instead they are leading to voter intimidation complaints.”

Richer and Gates are both Republicans.

Voters who filed with Democratic Secretary of State Katie Hobbs allege they were filmed and in some cases followed by people keeping watch on drop boxes.

“As we were getting up to our car, two individuals took pictures of our license plate and our car,” one voter wrote. “I got out and asked what they were doing. They claimed they were taking pictures for ‘election security’ and I took pictures of them to report them to the DOJ for voter intimation and harassments.”

Asked at an unrelated event Monday whether he was concerned about reported intimidation in states like Arizona, and if the Justice Department would get involved, U.S. Attorney General Merrick Garland said the department has an obligation to “guarantee a free, fair vote by everyone who is qualified to vote, and will not permit voters to be intimidated.”

A group of drop box watchers seen filming a drop box in Maricopa County last week told a local reporter they were with Clean Elections USA, a group that is gathering teams to watch drop boxes in several states this midterm season.

Jennings said that she wants volunteers to keep their distance from drop boxes and abide by local laws. But she added that they should sit in a visible place to act as a “human shield” that deters potential ballot “mules” from coming to drop boxes.

Arizona did not take any action to protect the drop boxes during the 2020 Presidential Election, but since the Democratic gubernatorial candidate supporters have made claims of videotaping…. Jennings has decided to post security.

Two left-leaning advocacy groups filed a lawsuit Monday against Clean Elections USA alleging the group’s ballot watching activities violate the Voting Rights Act of 1965 and the Ku Klux Klan Act of 1871. The Arizona Alliance for Retired Americans and Voto Latino are asking the U.S. District Court in Phoenix to ban the group from gathering within site of drop boxes and filming voters.

Arizona state Sen. Kelly Townsend, who earlier this year praised and encouraged “all you vigilantes that want to camp out at these drop boxes,” wrote on Twitter Monday that wearing tactical gear while watching drop boxes “could be considered voter intimidation.”

“Don’t do it,” Townsend wrote.

Penzone, the sheriff, implored people to respect everyone’s right to vote and leave it to law enforcement officers to investigate suspected violations of the law. He said the intense focus on securing elections has pulled resources away from investigating crimes.

“But we’ll come and we’ll babysit polling sites because people have to misbehave if that’s what we have to do to protect democracy,” said Penzone, a Democrat.