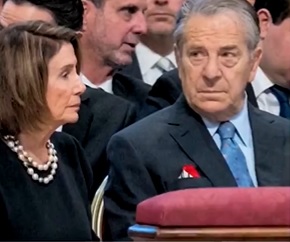 SAN FRANCISCO, November 1, 2022– The suspect in the assault of Paul Pelosi, the husband of Speaker of the House of Representatives Nancy Pelosi, was formally charged with assault and attempted kidnapping in federal court Monday.

David DePape, 42, of Richmond, Calif., was arrested by the San Francisco Police Department early Friday, according to a press release from the office of United States Attorney Stephanie M. Hinds of the Northern District of California.

The complaint was filed in the U.S. District Court for the Northern District of California, and attached is an affidavit from FBI Special Agent Stephanie Minor.

“According to the complaint, minutes after the 911 call, two police officers responded to the Pelosi residence where they encountered Paul Pelosi and DePape struggling over a hammer,” the press release continues. “Officers told the men to drop the hammer, and DePape allegedly gained control of the hammer and swung it, striking Pelosi in the head. Officers immediately restrained DePape, while Pelosi appeared to be unconscious on the ground. As set forth in the complaint, once DePape was restrained, officers secured a roll of tape, white rope, a second hammer, a pair of rubber and cloth gloves, and zip ties from the crime scene, where officers also observed a broken glass door to the back porch.” The broken glass appeared to fall onto the outside of the glass door.

DePape told police of his plans to hold Speaker Pelosi hostage to “talk to her” and viewed her “as the “leader of the pack” of lies told by the Democratic Party, the eight-page complaint says.

November 28, 2022
DOJ To Ask Court To Void The Mar-A-Lago’s Special Master, DOJ Appointed A Special Counsel Of It’s Own