China, November 7, 2022—Contrary to popular belief, the Chinese Communist Party’s recently closed national congress may not have been a one-sided victory for General Secretary Xi Jinping.

True, he won a clean sweep when it came to personnel appointments. But in other aspects, he did not win everything he wanted.

A quiet resistance seems to have begun five months earlier, when retired party elders were told by current party leadership to refrain from discussing general policies of the Party Central Committee in an open manner and not to spread negative remarks leading up to the national congress.

The notice was conveyed on May 15 by Ding Xuexiang, the then-director of the party’s General Office, who is now a member of the top decision-making body, the Politburo Standing Committee.

The culmination of the resistance surfaced on Oct. 26, four days after the national congress ended. That day, the full text of the party’s revised constitution adopted at the quinquennial event was made public.

This stood in contrast to the heavy spotlight on what Beijing is calling the “two establishes” during the congress. Many officials had emphasized the significance of establishing the two aspects. A banner calling for the two clauses was displayed on the streets of Beijing. Even a resolution adopted during the national congress includes it.

But at the end of the day, the “establish” clauses failed to make their way into the constitution.

The constitution also did not abbreviate Xi’s 16-character eponymous ideology — Xi Jinping Thought on Socialism with Chinese Characteristics for a New Era — into the shorter “Xi Jinping Thought,” which would have put it on par with the ideology of Communist China’s founding father, Mao Zedong, and above “Deng Xiaoping theory.”

The floated title of renmin lingxiu, people’s leader, was also nowhere to be found in the charter.

The inclusion of such a title could have paved the way for Xi to later assume the post of “party chairman,” which Mao held until his death. Becoming chairman is synonymous with becoming top leader for life.

Xi’s attempts to implement these changes were ultimately blocked by party elders. The retired officials who sat on the stage at the Great Hall of the People during the national congress are all children of the Deng era. They were not going to sit by and allow four decades of party tradition to crumble at Xi’s whim.

As a precaution against creating a dictatorship like Mao’s, the party constitution bans “any form of personality cult.”

The ban is one of the drastic changes to the party constitution made in September 1982 by Deng, who had come back to the center of power being purged during the 1966-1976 Cultural Revolution. Former Chinese President Hu Jintao taps protege Li Keqiang’s shoulder as he is escorted out of the national congress venue on Oct. 22. (Photo by Yusuke Hinata)

Since May, when they were told to stay quiet about general policies, party elders have rallied around a common purpose: Don’t allow a personality cult to be built around Xi.

Even if the resistance was not coordinated or structured, if one elder after another speaks against the amendments, even XI cannot ignore it.

Those opposed to the glorification of Xi would likely include Hu Jintao, the 79-year-old former president who became the center of a palace drama when he was escorted out of the congress’s closing ceremony on Oct. 22.

Hu’s exit from the stage came immediately before the vote on the constitutional amendment, which was to be a vote by a show of hands.

Former President Jiang Zemin would also be unlikely to support such glorification. The 96-year-old, who did not attend the congress, was appointed by Deng and cannot allow Xi to use the drastic revision of the party constitution as a tool to slight not only himself but his mentor as well. 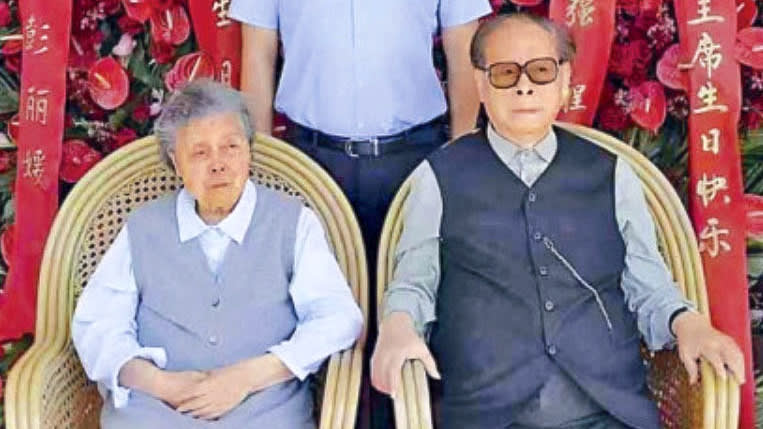 In this photo that circulated on the internet, former Chinese President Jiang Zemin is seated on the right. It is not known where or when the photo was taken.   © Kyodo

Xi’s daring moves are uniting even former rivals. Hu has long been feuding with members of the Shanghai faction, including Jiang and former Chinese Vice President Zeng Qinghong, 83. Nevertheless, the two camps now share the belief that a personality cult must never be allowed to be built around Xi.

Other rebels would naturally include Wen Jiabao, 80, a former premier under Hu, and Song Ping, 105, the oldest party elder. Song is credited with taking the Hu-Wen duo under his wing many decades back.

When it comes to personnel appointments, it is difficult even for influential elders, to interfere.

But rallying support for defending principles in place since 1982 is not. Thus the ban on personality cults, introduced by Deng, survived.

There is also objective evidence that this was the case.

In an article on constitutional revision, the state-run Xinhua News Agency noted that the basic content of the party document has been maintained in a stable manner for the past 40 years.

“Only on content on which a consensus is formed are amendments made,” it said.

Xinhua did not explain about the long history of the constitution when it published similar articles about revisions in 2012 and 2017. 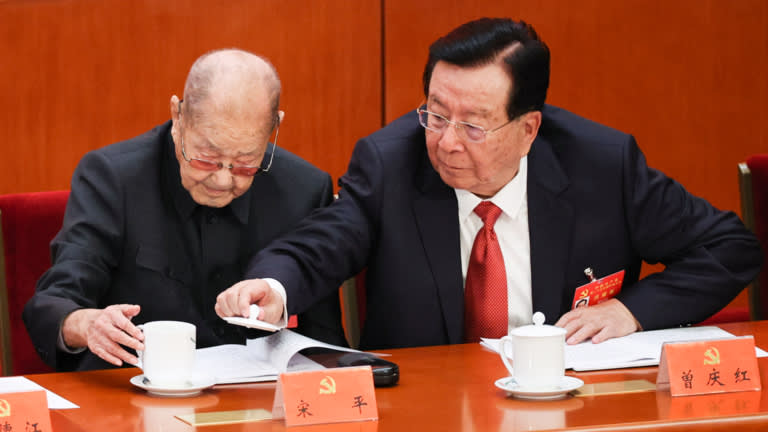 Xinhua was signaling that the latest revisions were made while heeding the importance of consensus-building.

It was a political setback for Xi, and the Xinhua article acknowledges this, though not in so many words.

While shooting down wording that would have established Xi’s ideology as the party’s guiding principle, the elders made one compromise. It agreed to “upholding” Xi’s core position and to “uphold the Central Committee’s authority and its centralized, unified leadership.”

Hu could not protect his younger-brother figure, Premier Li Keqiang, nor protege Hu Chunhua from losing their positions during Xi’s personnel reshuffle. But he managed to protect at least the party constitution, his last stronghold. Li Keqiang offers flowers to a statue of Deng Xiaoping in August. (Screenshot from CCTV)

From this prism, a new reality takes shape. Xi’s brazen act of filling every top leadership position with one of his own allies might have been the leader’s reaction to not being able to achieve the constitutional revisions he had desired.

The uphill constitutional climb should have become clear around the time of the Beidaihe meeting between incumbent leaders and retired elders.

Immediately after the Beidaihe meeting, which took place in early August, Premier Li visited Shenzhen, Guangdong province, and offered flowers to a statue of Deng. During his inspection tour of a port, Li referred to reform and opening-up, saying “The Yellow River and Yangtze River will not flow backward.”

Li’s remark was hinting that the party constitution dating back to the Deng era would be maintained.

Xi likely had to change his strategy. Understanding that it was impossible to push through the revision this time around, he started to look ahead five years from now, when advanced age will have weakened today’s party elders.

“This is the ‘new Gang of Four,'” a person familiar with Chinese politics said, an analogy to the notorious officials who led the Cultural Revolution, including Mao’s wife, Jiang Qing. Shortly after the end of the national congress, Xi led the full Politburo Standing Committee to Yan’an, Shaanxi Province, where in the 1940s Mao launched the Yan’an Rectification Movement to persecute his political opponents.

Proof of Xi’s ambitions can be seen in the fact that the Central Committee has no members born in the 1970s. Xi is blocking a generational change within the party as he aims for even greater heights.

But judging by their age, some of the “new Gang of Four” might get the boot in five years’ time, giving way to other Xi aides. Everything will depend on what Xi thinks.

According to reports in China “there is no doubt that the general secretary’s fierce political battle to drastically revise the party constitution will continue, at least for the next five years.”