After news of his medical emergency made headlines on Monday, Leno issued a statement to Variety. “I got some serious burns from a gasoline fire. I am OK. Just need a week or two to get back on my feet.”

The Grossman Burn Center, where Leno is being treated for burns to the left side of his face and hands, confirmed the accident happened in his garage. The comedian “is in good humor and is touched by all the inquiries into his condition,” according to a statement from the burn care facility.

People reported the 72-year-old talk show host had to cancel an appearance at The Financial Brand’s Forum in Las Vegas due to a health issue. He was set to perform a private comedy performance on Sunday night.

“His family was not able to provide us very many details, but there was a very serious medical emergency that is preventing Jay from traveling,” an email to attendees purportedly stated. “All we know is that he is alive, so our prayers go out to him and his family tonight.”

Yahoo Entertainment reached out to a rep for Leno, but did not immediately receive a response.

The former late night host has previously spoken out about health issues In 2019, he opened up to People out about battling high cholesterol in an effort to raise awareness about the importance of routine check-ups and eating healthy.

Source: Peoples, Variety and Yahoo contributed to the account. 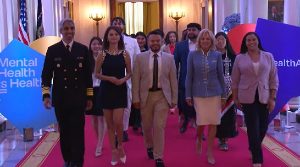