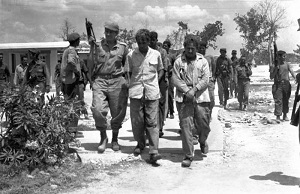 Today, President Donald J. Trump delivered remarks to honor the Bay of Pigs veterans as we commemorate the 40th anniversary of the Mariel boatlift and reaffirm the Trump Administration’s commitment to stand by the Cuban people in their quest for liberty. The Bay of Pigs invasion was a failed landing operation on the southwestern coast of Cuba in 1961 by Cuban exiles who opposed Fidel Castro’s Cuban Revolution.

The training camps were set up in Guatemala and the leader of the group would be Jose Miro Cardona. If the invasion had succeeded, Cardona was set to take over the provisional presidency of Cuba, according to the JFK Library.

“Today, we reaffirm our ironclad solidarity with the Cuban people and our eternal conviction that freedom will prevail over the sinister forces of communism and evil of many different forms,” said Trump.

“Sixty years ago, these Cuban patriots formed Brigade 2506 in a daring effort to liberate their homeland from the communist Castro regime.  Today, we declare America’s unwavering commitment to a free Cuba.  And you will have that.  You will have that very soon.”

“America secured the release of nearly all of the prisoners 20 months later, but the last prisoner was not released until 1986.  And upon his arrival in Miami, history records that he said, “I am grateful to be in the land of freedom.”

“Mr. President, you’ve taken strong action to stand for freedom in Cuba, Venezuela, and Nicaragua.  And today, with the new sanctions that you’ll be announcing at this event, you will confirm that, in this White House, it will always be: que viva Cuba libre,” said Vice President Mike Pence.

President @realDonaldTrump just announced that the Treasury will prohibit U.S. travelers from staying at properties owned by the Cuban government & restrict the importation of Cuban alcohol and tobacco.

U.S. dollars must go directly to the Cuban people, not the Cuban regime! pic.twitter.com/ZCZzILs9YB

The president announced just now that “the Treasury Department will prohibit US travelers from staying at properties owned by the Cuban government.”

“Today, we reaffirm our ironclad solidarity with the Cuban People, and our eternal conviction that freedom will prevail over the sinister forces of communism,” the president will tell the veterans according to prepared remarks released by the White House. “My administration stands with every citizen of Cuba, Nicaragua, and Venezuela in their fight for liberty.”

“The veterans we honor today are a powerful testament to all that a free people can achieve. In the past six decades, you have built strong families, thriving businesses, and vibrant communities.”