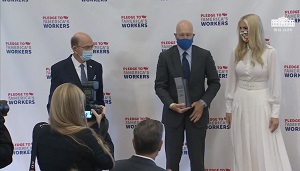 President Donald J. Trump signed an  executive order in 2018  which created the National Council for the American Worker and the American Workforce Policy Advisory Board–asking top U.S. organizations to cosign a “Pledge to America’s Workers.”

“Our Nation was facing a skills crisis.  There were more than 6.7 million unfilled jobs in the United States, and American workers, who are our country’s most valuable resource, need the skills training to fill them.  At the same time, the economy is changing at a rapid pace because of the technology, automation, and artificial intelligence that is shaping many industries, from manufacturing to healthcare to retail. “

“The COVID-19 pandemic has temporarily disrupted the livelihoods of American workers and businesses in unprecedented ways. But amid this seismic shift in the landscape of work, the U.S. economy and spirit are proving resilient.”

President Donald J. Trump’s economy  “has come roaring back to life” following the worse health pandemic since the swine flu. “The stock market has hit record highs after record highs, helping more Americans build wealth and secure their futures. Through needed tax cuts and reform, the Administration will bring jobs back to our country.”