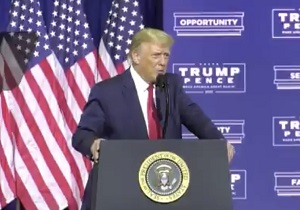 For decades, Blacks have supported the Democratic Party, but their communities and schools continue to crumble.  But President Trump has implemented school choice and empowerment zones in Black communities.

The Democrats mad big promises to the Black communities and families—and they kept one promises—the 3 Strikes You Out reform bill that Presidential Candidate Joe Biden authored.  The 3 strikes bill has destroyed the Black families—leaving many families without their fathers, mothers, and grandparents.  President Trump—changed the Biden/Harris prosecution plan for Blacks—by signing the “First Step Act”.

“This legislation reformed sentencing laws that have wrongly and disproportionately harmed the African-American community,” Trump said. “The First Step Act gives nonviolent offenders the chance to reenter society as productive, law-abiding citizens. Now, states across the country are following our lead. America is a nation that believes in redemption.”

“The law takes several steps to ease mandatory minimum sentences under federal law. It expands the “safety valve” that judges can use to avoid handing down mandatory minimum sentences. It eases a “three strikes” rule so people with three or more convictions, including for drug offenses, automatically get 25 years instead of life, among other changes. It restricts the current practice of stacking gun charges against drug offenders to add possibly decades to prison sentences. All of these changes will lead to shorter prison sentences in the future.”

“Today’s action is a big part of the solution to restoring, renewing and rebuilding our communities,” he said. “For the last three and a half years, my administration has been focused on creating opportunity, fighting for equal justice and truly delivering results.”