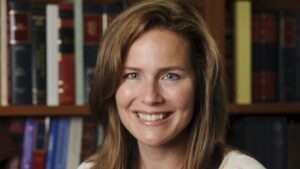 Barrett is the Justice Antonin Scalia’s model.  Expect Barrett to rule like Scalia as the animated proponent of originalism and structural constitutionalism.

Barrett said in her first statement “I was lucky enough to clerk for Justice Scalia and given his incalculable influence on my life—I am moved to have members of his family here today.”   I clerked for Justice Scalia twenty years ago, but the lessons I learned still resonate.”   His judicial philosophy is mine too.  A judge must apply the law as written. Judges are not policy makers, and they must be resolute and setting aside any policy views they might hold.”

“Justice Scalia was an originalist in that he interpreted the U.S. Constitution in accordance with the meanings and intentions that were present when it was first adopted. This legal philosophy is the ideological opposite of a “living Constitution” that evolves by incorporating the contemporary meanings and intentions of society-at-large.  Scalia’s judicial philosophy—which holds that the Constitution should be interpreted in terms of what it theoretically meant to those who ratified it over two centuries ago,” resonates today as Barrett’s philosophy.

In Justice Scalia’s view, the Constitution was not supposed to facilitate change but to impede change to citizens’ basic fundamental rights and responsibilities. Barrett has given all indications that she intends to follow Scalia’s philosophy to “apply the law as written,” and setting aside her personal policy views.”

Justice Scalia abhorred “judicial activism” and believed the place for implementing change was in the legislature, where the will of the people is represented. Barrett’s opponents stress that by interpreting the Constitution in its original form, any progressive law (abortion and equal rights) would be declared unconstitutional because it doesn’t adhere to the original intent of the founders.

Justice Scalia was a believer of state rights.  The Supreme Court confirmed stated rights, and held in the Obamacare case “that federal authorities could not take away a state’s Medicaid funding for refusing to expand the program.”

Many Federalists argued, as in Federalist No. 84, that the people surrendered no rights in adopting the Constitution.

“I am one of that small band of judges who are called originalists,” he said. The Constitution “means today just what it meant when it was adopted.”

Scalia once wrote in an opinion referencing the Federalist papers:

“If there was one predominant thread running through Scalia’s cases it was a determination, consistent with his originalism, to limit the unelected judiciary’s power to the exercise of “merely judgment,” as characterized by Alexander Hamilton in a Federalist Papers passage that Scalia loved to quote.”

Scalia were highly concerned at the idea that judges were the custodians of a “living Constitution” whose meaning they could change in accordance with “evolving standards.” As Scalia wrote dissenting from the court’s 2005 death penalty decision in Roper vs. Simmons: “On the evolving-standards hypothesis, the only legitimate function of this Court is to identify a moral consensus of the American people. By what conceivable warrant can nine lawyers presume to be the authoritative conscience of the Nation?”

This Essay focuses specifically on the sources Justice Scalia used for his plain-meaning argument to define “vacancies that may happen,” the credibility of these sources, and whether there are other sources that substantiate his argument.

Barrett is expected to bring back the Federalist Essay’s as Scalia to strengthen the Supreme Court and our Nation.  The Supreme Court is as strong as its people and the interpretation of its justices. Justice Barrett–to take our progressive laws to a new and higher horizon—of applying the Federalist Essay’s and the opinions of Hamilton and Scalia with a touch of Madison.