The parade marked the 75th anniversary of the Workers’ Party.

It is the country’s first parade in two years and comes just weeks ahead of the US presidential election.

North Korea had not featured ballistic missiles in its parades since President Donald Trump and Mr Kim held their first summit in 2018.

According to South Korea’s military, the parade took place before dawn on Saturday. The reason for its early timing is not yet known.

No foreign media or foreigners were allowed to attend, so analysts are relying on edited state-media footage which is being released to assess the parade. 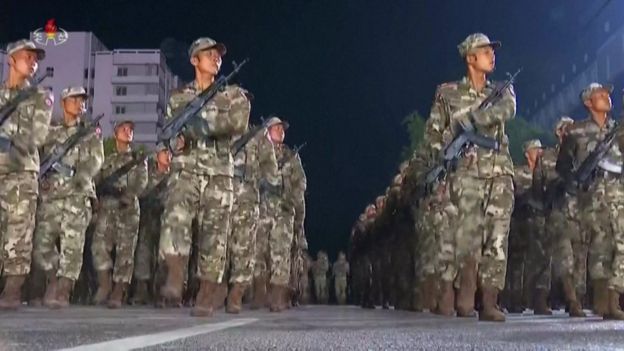 Image AFP Image caption During the parade, none of those involved appeared to be wearing masks

In a speech, he said North Korea would continue to “strengthen” its military for “self-defence and deterrence”.

He also said he was grateful that no North Koreans have contracted Covid-19.

“I wish good health to all the people around the world who are fighting the ills of this evil virus,” he said.

Despite claiming the country has no cases of coronavirus, Mr Kim continues to hold high-level meetings to ensure tight restrictions remain in place.

Analysts have said it is highly unlikely that North Korea has not experienced any coronavirus cases at all.

Kim Jong-un ended his speech with a cry of “long live our great people!”, but only after conceding that his country was struggling economically.

But from seeing the military hardware trundling across Kim Il-sung Square on state television, it’s clear there has been no expense spared on North Korea’s armed forces.

Analysts watching the highly choreographed event online will have noticed soldiers armed with new assault weapons, along with what look like new air defence systems and armoured vehicles.

However, it is the sight of new ballistic missiles that will cause the most concern in foreign capitals.

First came the Pukguksong 4A submarine-launched missile, followed by a huge Intercontinental Ballistic Missile (ICBM) on a launcher vehicle with a colossal eleven axles, so new we don’t even know what name it’s been given.

North Korea has spent the last year or so saying it would build up its nuclear capabilities, and the show of the new ICBM at Saturday’s parade is designed to bolster this message. Where that takes the prospects for peace and diplomacy on the Korean peninsula is anybody’s guess.

There was no sign of anyone wearing masks during the parade. However, there were far fewer people involved in the event than usual, AFP news agency reports.

North Korea closed its borders to the outside world in January to prevent an outbreak of Covid-19 spreading from neighbouring China.

Authorities have reportedly issued “shoot-to-kill” orders along the border and created a buffer zone to stop anyone entering the country.

Last month Mr Kim apologised for the fatal shooting of a South Korean. South Korea said the 47-year-old man was found by troops while floating in the North’s waters. He was then shot dead and his body was set alight, according to Seoul.

For weeks, satellite imagery has shown thousands of people practising for Saturday’s parade.

Foreign officials in Pyongyang had been told to avoid travelling through the city, going near the event venue and taking photos of the event.