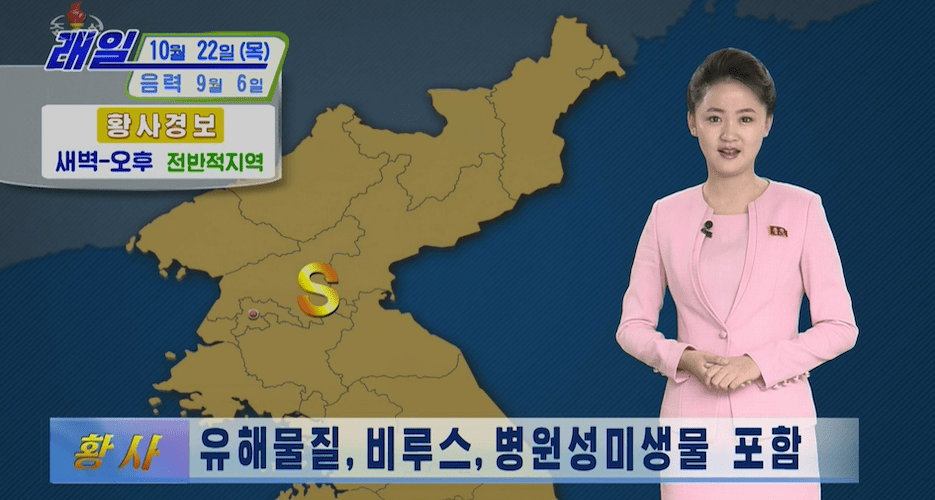 Despite claiming that it has ‘zero cases of COVID-19,’ North Korea demanded its people stay inside for fear that yellow dust traveling through the air from China could carry the “malignant virus” into the country.

On Wednesday, North Korean state media aired special weather segments that warned of yellow dust sweeping across the country on Oct. 22. The next morning, the Russian Embassy in Pyongyang stated in a Facebook post that the DPRK’s foreign ministry told diplomatic missions and other international organizations that it “highly recommends” they stay inside and avoid opening windows throughout the day.

“As we were told, these measures are due to the fact that COVID-19 can be introduced to the territory of the DPRK along with the ‘yellow dust’ particles,” the embassy wrote. The embassy also claims that a similar warning was given to Russia’s consulate in Chongjin as well as workers at RasonConTrans, a Russia-DPRK Joint Venture in Rason.

Meanwhile, sources confirmed to NK News that almost no citizens were seen on the streets of Pyongyang on Thursday. The sources said that the handful of people who went outside wore raincoats, despite no precipitation that day.

Workers at construction sites across the country were also “banned” from laboring outdoors on Thursday, according to a Korean Central News Television (KCTV) special segment that aired the night before. The program also specifically mentioned this ban also applies to urgent construction projects, including the nation’s “recovery campaign” after typhoons and floods ravaged several parts of the country.

On Thursday morning, the state-run Rodong Sinmun newspaper stressed that anti-epidemic quarantine workers across the country should “clearly recognize the danger of [the] malignant virus entering” North Korea through yellow dust.

The article reasoned that research around the world has demonstrated that COVID-19 can be “transmitted through air,” and thus North Korea should take the incoming flow of yellow dust seriously.

So far, South Korean media has suggested that it’s nearly impossible for yellow dust from China to spread COVID-19 to North Korea.

“Thoroughly preventing damages from the yellow dust … is a pressing task to keep the quarantine front impenetrable,” the Rodong Sinmun article stated.

Edited by Kelly Kasulis. Chad O’Carroll contributed to this report.