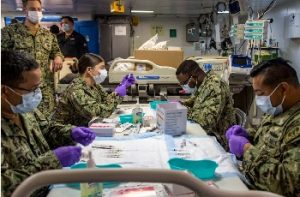 CALIFORNIA (January 9, 2021)— the Recall Campaign against California Governor Gavin Newsom  has reached a milestone this week when they received their 1,000,000th (one millionth) signature in the historic recall attempt against the controversial political figure.

“The people are being heard loud and clear, and it is not a matter of IF we are going to reach our goal necessary that will trigger a recall election of Newsom, it is just when we cross the finish line,” said Orrin Heatlie, the Lead Proponent of the official RecallGavin2020.com

Heatlie said that “thousands of Californian voters are now dialed into our grassroots campaign on a daily basis.”

“You cannot control a political movement; however, you can be the driving force behind it, and for that we are forever grateful for everyone behind us and standing with us in our effort,” said Heatlie.

Heatlie added that the recall campaign is now a “literal steamroller and Gavin Newsom’s failed policies are being runover and flatten by the People of California who will no longer be held hostage to his dictatorial failed policies.”

Senior Advisor Randy Economy added that the #RecallGavin2020 campaign has become a “media juggernaut” during the past two months that has resulted in “hundreds and thousands” of positive media reports generated featuring RecallGavin2020.com.

“The movement to Recall Gavin Newsom as Governor of California is fueled by tens of thousands of supporters, everyday Californians who are going door to door and getting signatures signed by their friends, family and neighbors,” said Heatlie.

The California Patriot Coalition/Recall Gavin Newsom 2020 is the officially legally authorized campaign committee responsible for the recall.  A total of 1,497,000 valid signatures must be collected before March 17th and submitted to local county election officials in all 58 counties.