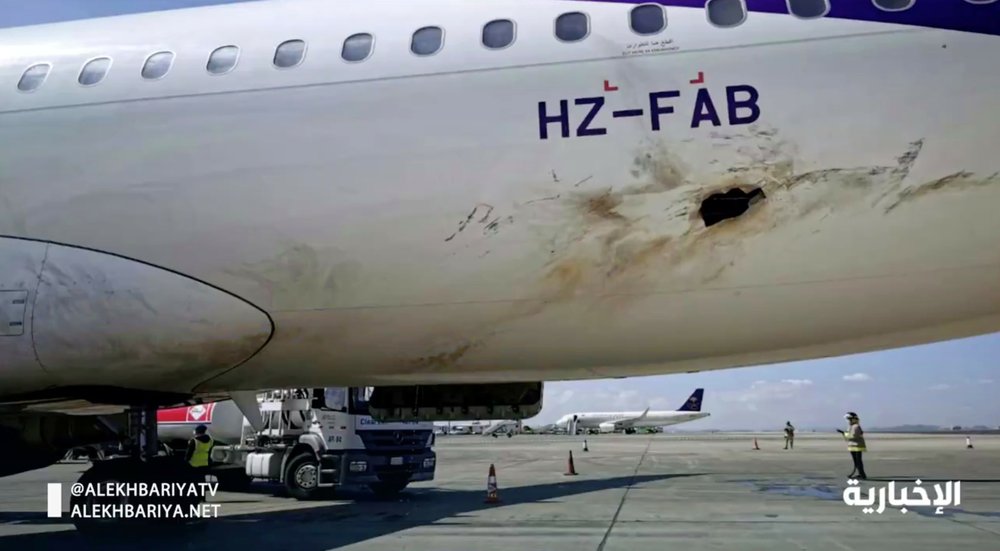 No one was hurt in the assault, but the damaged passenger plane at Abha airport served as a powerful reminder of the danger that Houthi rebels pose to Saudi Arabia, which nearly six years ago launched a bombing campaign that has devastated the Arab world’s poorest country.

The Iran-aligned Houthis soon claimed responsibility for the assault, with military spokesman Yehia Sarea stressing that the Houthis consider Abha airport to be a military, not civilian, target.

“This targeting comes in response to the continued aerial bombardment and the brutal siege of our country,” Sarea said, adding the group attacked with four bomb-laden drones.

Col. Turki al-Maliki, the spokesman for the Saudi-led military coalition fighting in Yemen, said forces earlier intercepted and destroyed two drones launched by Houthis toward the country’s south. He condemned the assault as a “systematic and deliberate attempt to target civilians.”

Photographs later aired by Saudi state television showed the aircraft, a 3-year-old Airbus A320 flown by low-cost carrier FlyADeal. It appeared the drone had punched a hole through its fuselage, with scorch marks on the metal. An anchor on state television said there were no injuries on the ground from the fire. FlyADeal did not immediately respond to requests for comment.

Since 2015, the Houthis battling the Saudi-led military coalition have targeted international airports, along with military installations and critical oil infrastructure, within Saudi Arabia. The Houthis repeatedly have used drones against Saudi Arabia, including crashing them into the kingdom’s Patriot missile batteries, most recently on Sunday when the coalition said it intercepted five “booby-trapped” drones. Those attacks, often striking near the southern cities of Abha and Jizan, have wounded dozens and killed at least one person in recent years.

As recently as late January, U.S. forces stationed at Prince Sultan Air Base near Riyadh trained Saudi troops on how to counter the threat posed by drones, which can fly low to the ground, evade radar and detonate against targets in the kingdom.

In November 2017, the Houthis even reached Riyadh’s international airport, deep inside the kingdom. No one was hurt in the attack, which marked the first time that a Houthi missile had come so close to a heavily populated center. Riyadh is around 620 miles (1,000 kilometers) north of the border with Yemen.

Saudi officials have blamed Iran for providing ballistic missiles to the Houthis used in such attacks against the kingdom. Tehran denies arming to the Houthis, despite evidence to the contrary.

The attack late Wednesday afternoon reportedly was the first to impact a civilian aircraft at the facility. Flight-tracking websites showed delayed and canceled flights scheduled to either take off or land at the airport. Flights at Abha airport resumed some time after the attack.

The U.S. Air Force’s Central Command, based at Al-Udeid Air Base in neighboring Qatar, declined to comment on the assault.

In recent weeks, the Houthis have accelerated their push to wrest control of Yemen’s oil-rich government stronghold of Marib and escalated their cross-border attacks on the kingdom. On Tuesday, U.N. envoy Martin Griffiths said he was “extremely concerned” about hostilities in Marib, especially at a time of “renewed diplomatic momentum.”

Yemen’s war started in 2014, when the rebels seized the capital, Sanaa, and much of the country’s north. Saudi Arabia, along with the United Arab Emirates and other countries, intervened months later to dislodge the Houthis and restore the internationally recognized government. The war has killed some 130,000 people and spawned the world’s worst humanitarian disaster.

President Joe Biden has turned a spotlight on the brutal conflict, declaring last week that the United States would end its support of the Saudi-led military offensive, including “relevant” arms sales. The administration has also moved to lift a terrorist designation against the Houthis, citing the need to mitigate Yemen’s humanitarian crisis.

But Biden stressed that the U.S. would continue to help Saudi Arabia defend itself against outside attacks, as part of maintaining key security, counterterrorism and military ties with the kingdom, a strategic partner and global oil giant.

Photo: In this frame grab from video, Saudi state television shows an airplane damaged in an attack by Yemen’s Houthi rebels at an airport near Abha, Saudi Arabia, Wednesday, Feb. 10, 2021. Yemen’s Houthi rebels targeted the airport in southwestern Saudi Arabia, causing a civilian plane on the tarmac to catch fire, the kingdom’s state television reported, an attack that threatens to escalate Yemen’s grinding war. Authorities initially suspected the attack was carried out by a drone. (Saudi state television via AP).