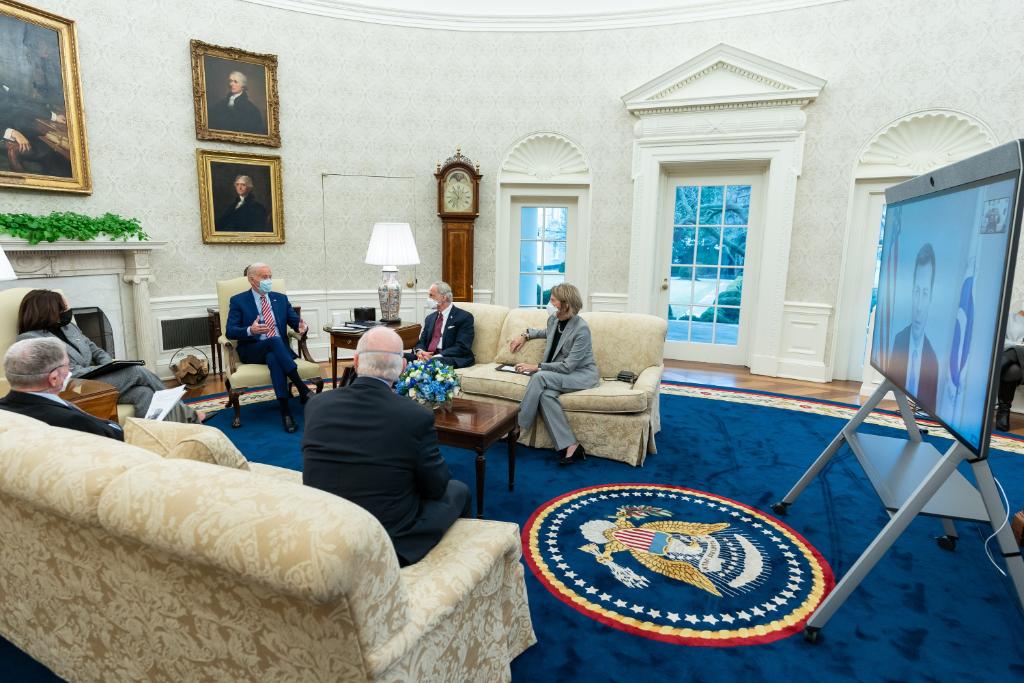 WASHINGTON, D.C. (February 11, 2021)—Today, President Biden and Vice President Harris met in the Oval Office with a bipartisan group of Senators from the Environment and Public Works (EPW) Committee, and Transportation Secretary Pete Buttigieg joined virtually, to discuss the critical need for investing in modern and sustainable American infrastructure. The meeting is one of several the Administration plans to conduct on infrastructure with Members of Congress and stakeholders.

The President, Vice President, Secretary, and Senators established the mutual understanding that America needs to build new infrastructure across urban and rural areas and create millions of good-paying jobs in the process to support the country’s economic recovery in the months and years ahead. They had a productive conversation and exchanged constructive ideas to further inform President Biden’s economic recovery plans to build back our country better for working families. They also expressed a deep commitment to working across the aisle to deliver infrastructure and jobs to American communities.

The President, Vice President, and Secretary also shared the Administration’s vision for building sustainable infrastructure that will withstand the impacts of climate change and fuel an American clean energy revolution. They also reiterated their commitment to making sure no workers are left behind, underscoring how the Administration will bring construction, manufacturing, engineering, and skilled-trades jobs — with the choice to join a union — directly to the communities that are too often left behind.

THE PRESIDENT: Folks, thanks for coming in. I’m going to be very brief. We’re going to get to it.

We want to talk about infrastructure, and this committee is central to everything that’s going to happen. I’ve been around long enough — and Tom and Jim and all of us — that — it used to be that infrastructure wasn’t a Democrat or Republican issue. There are not many Republican or Democratic roads and bridges, and so on.

So we’re going to talk about infrastructure. And I want to hear what’s on the minds of my colleagues here, and we’re going to see what we can put together. There’s a number of things that are out there that the American people are looking at us to step up.

Again, it’s not — I really, honest to God, never have thought of the — of infrastructure as being a partisan issue. It’s about — I mean, a lot of bridges in West Virginia, a lot of — a lot of dangerous spots along Route 9, in terms of Cancer Alley. A lot of places where we’re having problems all across the country.

SENATOR CARPER: The highest point of land in Delaware is a bridge, for the record.

THE PRESIDENT: That’s right. And I’ll tell you what — and Tom climbs up all the time.

But all kidding aside, there’s — there’s a lot we have to do. And I could think of no better group of people to start off with to try to see if we can come to some kind of generic consensus about how to begin. They have a lot of jurisdiction over a significant portion of infrastructure.

Last night, I was on the phone for two straight hours with Xi Jinping. And you all know as well as I do, these folks — and it was a good conversation. I know him well. We spent a lot of time together over the years I was Vice President. And — but, you know, they’re going to — if we don’t get moving, they’re going to eat our lunch. They have major, major new initiatives on rail. And they already have rail that goes 225 miles an hour with ease. They’re working — they’re working very hard to do what I think we’re going to have to do.

And I think the automobile industry is already there and so is labor. They’re going to — they’re working very hard to try to move in a position where they end up being the source of a — of a new way in which to power automobiles, which would — they’re going to invest a lot of money. They’re investing billions of dollars and dealing with a whole range of issues that relate to transportation, the environment, and a whole range of other things. So we just have to step up.

And so what I’d like to — I’m going to talk to these folks about, which is the key committee, is how we begin this. I’ve laid out what I think I have to do — we should be doing. And they have a plan, as well, within their jurisdiction. But they’re also very, very competent senators who know a lot more than beyond their jurisdiction about the things they need. So I’m looking for a wholesome conversation or a fulsome conversation.

So thank you all for coming in.

Q  Mr. President, did you see the video yesterday on Capitol Hill? And what was your reaction to it?

THE PRESIDENT: I did not — I’m sorry, what did you say?

Q  Did you see the video yesterday during the impeachment trial? And what was your reaction, Mr. President?

THE PRESIDENT: I told you, what I’m — I’m focused on — my job is to deal with the promises I made. And we all know we have to move on. Today, it’s about jobs and infrastructure.

I, like other Americans, watched the news. I didn’t watch any of the hearing live because I was going straight through, last night, until a little after nine. But I watched some this morning. I think the Senate has a very important job to complete. And I think — my guess is some minds may have been changed, but I don’t know.

Thank you. Thank you very much.