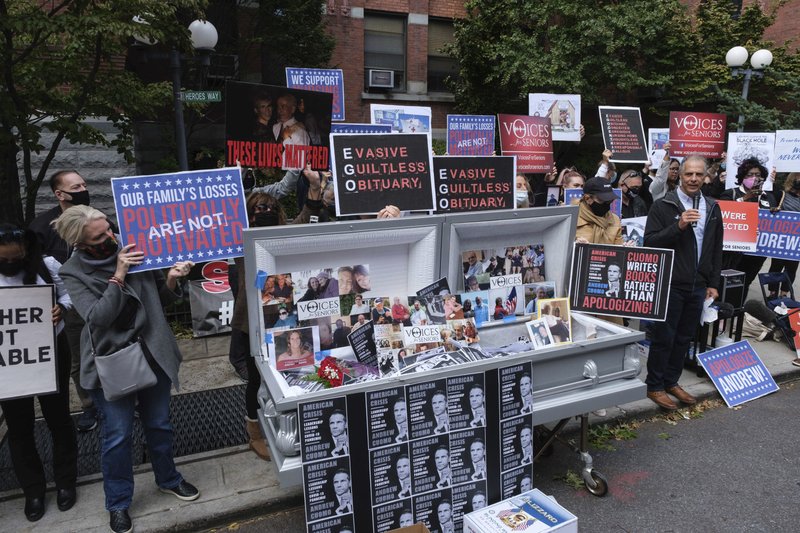 NEW YORK (February 11, 2021) — More than 9,000 recovering coronavirus patients in New York state were released from hospitals into nursing homes early in the pandemic under a controversial order that was scrapped amid criticisms it accelerated outbreaks, according to new records obtained by The Associated Press.

The new number of 9,056 recovering patients sent to hundreds of nursing homes is more than 40% higher than what had been previously released by the state health department. And it raises new questions as to whether Gov. Andrew Cuomo’s March 25 directive helped spread sickness and death among residents, a charge his administration disputes.

“The lack of transparency and the meting out of bits of important data has undermined our ability to both recognize the scope and severity of what’s going on,” said Richard Mollot, the executive director of the Long Term Care Community Coalition, a residents advocacy group.

The new figures come as the Cuomo administration has been forced in recent weeks to acknowledge that the overall number of COVID-19 deaths among long-term care residents is nearly 15,000, up from the 8,500 previously disclosed.

Cuomo’s March 25 directive requiring nursing homes to take recovering COVID-19 patients was intended to free up space in hospitals swamped in the early days of the pandemic. It came under criticism from advocates for nursing home residents and their relatives for the potential to spread the virus in a state that at the time already had the nation’s highest nursing home death toll.

In its reply to an AP Freedom of Information request from May, the state health department this week released two figures: a previously released count of 6,327 admissions of patients directly from hospitals and a new count of 2,729 “readmissions” of patients sent back from a hospital to the nursing home where they had lived before.

Critics have long argued there were many other places those patients could have been sent, including New York City’s Jacob Javits Convention Center, which had been set up as a makeshift hospital, and the USS Comfort military hospital ship. The state contends those facilities were not suitable for such patients.

State health officials contend that asymptomatic nursing home employees, not recovering COVID patients, were the driving factor in nursing home outbreaks. And they have repeatedly noted that by law, nursing homes weren’t supposed to accept anyone they couldn’t adequately care for.

“At least 98% of nursing home facilities in the state had COVID in their facility before their first admission or readmission, and as we’ve seen across the nation, the major driver of infections appears to be from asymptomatic staff through no fault of their own,” said state Health Commissioner Dr. Howard Zucker in a statement to the AP. He added that the March 25 order followed federal guidance.

“There has never been any question in my mind that sending COVID-19 patients into completely unprepared, understaffed and underresourced nursing homes both increased transmission and led to a greater number of deaths,” Wasserman said.

New York’s health department in July released a 33-page report, heavily criticized by health experts and resident advocates, that said patients sent to homes posed little danger to residents because they had spent an average nine days at the hospitals — the same period that it likely takes for the virus to no longer be contagious.

Some states, including Connecticut, set up COVID 19-only nursing homes relatively early on, something that didn’t initially happen in New York.

New York Health Commissioner Dr. Howard Zucker told lawmakers in a letter this week that state started working in November to establish COVID-only nursing homes for some “persistently positive” patients coming out of hospitals. There are now 19 such homes statewide, totaling nearly 2,000 beds.

Cuomo, who wrote a book about his leadership in handling the pandemic in his state, has repeatedly downplayed such criticism of his administration’s handling of nursing homes in the crisis as a politically motivated “blame game.”

But the flurry of new disclosures began last month after state Attorney General Letitia James, a fellow Democrat issued a blistering report accusing the administration of underreporting its long-term care deaths by more than 50%.

That was consistent with an AP report from August that focused on the fact that New York is one of the only states that counts just those who died on nursing home property and not those who died after being transported to hospitals.

Under heavy pressure to change its methodology, New York began issuing reports in recent days that added thousands more to its long-term care death toll since March. That lifted the total dead to nearly 15,000 from about 8,500 last month. The new data also confirmed that COVID-19 deaths at some nursing homes are double or more what had been previously reported.

Cuomo has repeatedly used the lower death figures previously reported to cast his administration’s response to the pandemic in a favorable light, noting that nursing home deaths compared with total deaths in the state were lower than nearly every other state. The new data shows that claim was wrong. They put nursing home resident deaths at 36% of New York’s total deaths, roughly the average for the country as a whole.