The United States will work with our partners across the globe to expand manufacturing and distribution capacity and to increase access, including to marginalized populations.

Here’s how else we plan to contribute to ending this pandemic.  As some of you will have seen, President Biden’s first National Security Memorandum made clear that the United States will once again serve as a global health leader.  The United States believes that multilateralism, the United Nations, the World Health Organization are essential – not just as an effective international COVID-19 health and humanitarian response, but also building stronger global health capacity and security for the future.  We have the immediate challenge of COVID-19; we have a longer challenge, but equally vital, in establishing the strongest possible global health structure going forward….

In Memory of Rush Limbaugh

“Limbaugh’s wife, Kathryn, made the announcement on his radio show. … Perched behind his Golden EIB (Excellence in Broadcasting) Microphone, Limbaugh spent over three decades as arguably both the most beloved and polarizing person in American media. … Limbaugh helped boost Trump’s influence prior to the 2016 election simply by taking him seriously as a candidate when other established conservatives didn’t want the former reality television star anywhere near the Republican Party.” Listen to Kathryn’s announcement… George W. Bush’s remembrance

“Presidents Obama and Trump used their executive authority to cancel student loan debt. … Cancelling $50,000 in federal student loan debt will help close the racial wealth gap, benefit the 40% of borrowers who do not have a college degree, and help stimulate the economy. It’s time to act. We will keep fighting.” Senator Elizabeth Warren tweeted the full statement: 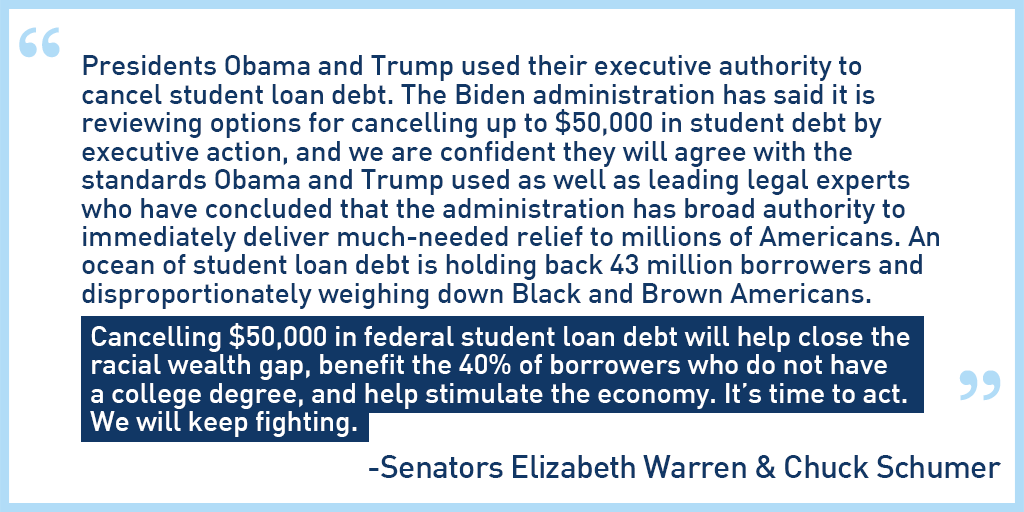