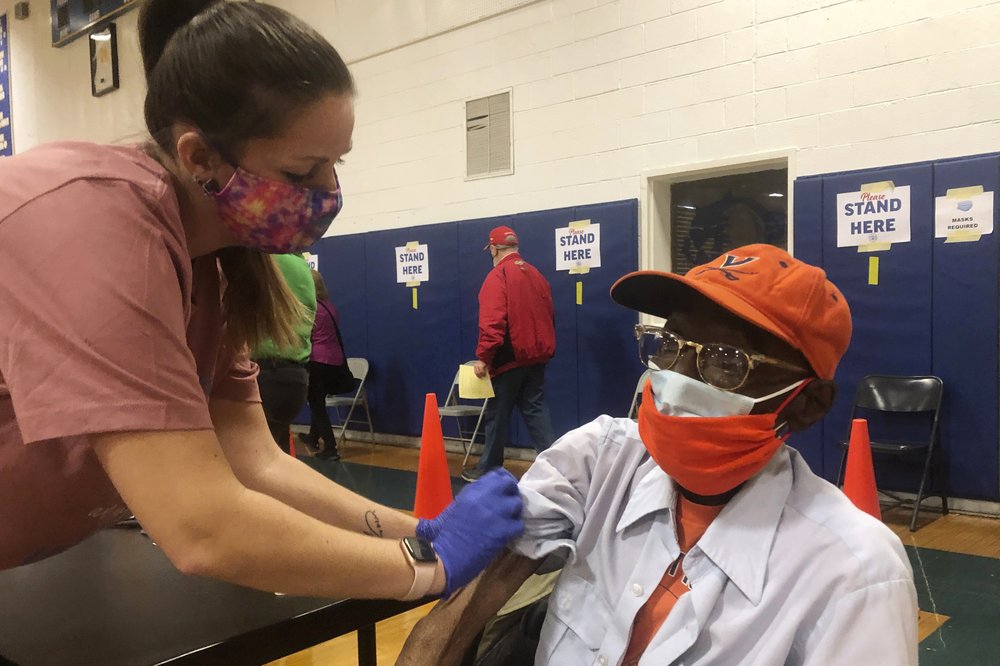 SURRY, Va. (March 6, 2021) — When Charlome Pierce searched where her 96-year-old father could get a COVID-19 vaccine in January, she found zero options anywhere near their home in Virginia. The lone medical clinic in Surry County had none, and the last pharmacy in an area with roughly 6,500 residents and more land mass than Chicago closed years ago.

To get their shots, some residents took a ferry across the sprawling James River to cities such as Williamsburg. Others drove more than an hour past farms and woodlands – the county got its first stoplight in 2007 – to reach a medical facility offering the vaccine.

At one point, Pierce heard about a state-run vaccination event 45 minutes away, No more appointments were available, which perhaps was for the best: the wait there reportedly could last up to seven hours.

“That would have been a daunting task,” she said, citing her father’s health conditions and frequent need to use the bathroom. “I could not have had him sit in a car and wait for something that might happen. We’re not in a Third World country.”

As the nation’s campaign against the coronavirus moves from mass inoculation sites to drugstores and doctors’ offices, getting vaccinated remains a challenge for residents of “pharmacy deserts,” communities without pharmacies or well-equipped health clinics. To improve access,” the federal government has partnered with 21 companies that run free-standing pharmacies or pharmacy services inside grocery stores and other locations.

More than 40,000 stores are expected to take part, and the Biden administration has said that nearly 90% of Americans live within five miles of one, from Hy-Vee and Walmart to Costco and Rite-Aid.

But there are gaps in the map: More than 400 rural counties with a combined population of nearly 2.5 million people lack a retail pharmacy that’s included in the partnership. More than 100 of those counties either have no pharmacy or have a pharmacy that historically did not offer services such as flu shots, and possibly lacks the equipment or certified staff to vaccinate customers.

Independent pharmacies that have traditionally served rural areas have been disappearing, casualties of mail-order prescriptions and more competition from chains like Walgreen’s and CVS with greater power to negotiate with insurance companies, according to Keith Mueller, director of the University of Iowa’s RUPRI Center for Rural Health Policy Analysis.

“There are a lot of counties that would be left out” of the Federal Retail Pharmacy Program, said Mueller, whose research center compiled the pharmacy data on the 400 counties. “In the Western states in particular, you have a vast geography and very few people.”

Challenges to obtaining a vaccine shot near home aren’t limited to rural areas. There is a relative dearth of medical facilities in some urban areas, particularly for Black Americans, according to a study published in February by the University of Pittsburgh’s School of Pharmacy and the West Health Policy Center.

The study listed 69 counties where Black residents were much more likely to have to travel more than a mile to get to a potential vaccination site, including a pharmacy, a hospital or a federally qualified health center. One-third of those counties were urban, including the home counties of cities such as Atlanta, Houston, Dallas, Detroit and New Orleans.

Additionally, the study identified 94 counties where Black residents were significantly more likely than white residents to have to go than 10 miles to reach a potential vaccination site. The counties were mostly heavily concentrated in the southeastern U.S. — Virginia had the most of any state with 16 — and in Texas.

The shortage of pharmacies and other medical infrastructure in some of the nation’s rural areas highlights the health care disparities that have become more stark during the coronavirus pandemic, which has disproportionately affected members of racial minority and lower-income groups.

The former drug store in Surry County, where about 40% of the residents are Black, is now a café. No one seems to remember exactly when the Surry Drug. Co. closed, but café co-owner Sarah Mayo remembers going there as a child. Now, she drives 45 minutes to a Walmart or CVS.

“I don’t know if more people would take the vaccine” if the pharmacy still existed, Mayo, 62, said. “But at least you would have a local person that you trust who would explain the pros and cons.”

Surry County residents also used to pick up prescriptions at Wakefield Pharmacy in neighboring Sussex County until it, too, closed in November. The owner, Russell Alan Garner, wanted to retire and couldn’t find a buyer.

In January, Surry County officials saw vaccines arrive in other parts of Virginia that had more people or more coronavirus cases. Fearing doses might not arrive for months, if ever, they began to pressure state officials.

In a letter to the governor’s office, Surry joined with surrounding communities to express concerns about vaccine “equity,” particularly for low-income and other disadvantaged populations. Some of those communities said they had reallocated money to support vaccination efforts.

“The thing about living in a rural community is that you’re often overlooked by everybody from politicians right on through to the agencies,” said county Supervisor Michael Drewry.

Surry County Administrator Melissa Rollins wrote to the regional health district, stating that driving outside the county wasn’t practical for most residents. She said Surry was willing to sponsor a mass vaccination site, had devised a plan to recruit people who could administer shots and make sure that eligible residents would be ready.

The first clinic in Surry County was held Feb. 6 at the high school in the small town of Dendron. The school district was inoculating teachers and other staff members when officials with the county and regional health district staff learned of extra doses, prompting a rush to get the word out.

Surry already had a waitlist of eligible people through a survey it designed to reach vulnerable residents. It used its emergency alert telephone system, since internet access is spotty.

Pierce got the call and quickly headed out with her father, Charles Robbins. It was a 20-minute drive to the high school and a two-hour wait. Pierce, 64, also got a shot, along with about 240 other people that day.

Three more vaccination clinics have been held in the county. And the regional health district had administered 1,080 doses there as of March 2. The number makes up the majority of doses that county residents have received, although several hundred received their shots outside of the county.

All told, about 1,800 county residents have received at least one dose. That’s about 28% of the population and was almost twice the state’s average rate. About half the people who’ve received vaccines are Black.

The Virginia Department of Health said that vaccine distribution has been based on population and COVID rates. But moving forward, the department said it’s considering tweaks to ensure more geographical and racial equity.

Pierce and her father were relieved to get their second shots in late February. But she said Surry’s rural character placed it at a disadvantage in the beginning.

“I have close friends, people who are essential workers, who’ve had to go as far away as an hour to get a shot,” she said. “You shouldn’t be marginalized by your zip code.”

But driving vast distances is a way of life for many in rural areas, said Bruce Adams, a cattleman and commissioner for Utah’s San Juan County, which is nearly the size of New Jersey and overlaps with the Navajo Nation.

“I got both shots, and I had to drive 44 miles roundtrip for each one to a public health center,” Adams, 71, said. “I don’t think it’s any more of a problem than anything else we do normally in our lives…going to the doctor, the dentist, getting your haircut.”

Photo:Debbie Monahan, a school nurse, pulls down Charles Robbins’ sleeve after giving him his second shot of the coronavirus vaccine at Surry County High School in Dendron, Va., on Saturday Feb. 27, 2021. Getting the coronavirus vaccine has been a challenge for rural counties in the U.S. that lack medical facilities such as a pharmacy or a well-equipped doctor’s office. (AP Photo/Ben Finley)