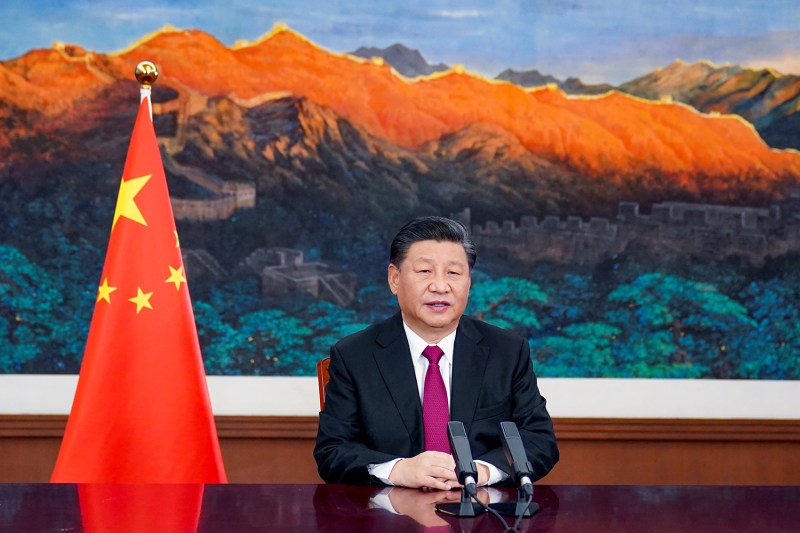 BEIJING (March 10, 2021) — The catchword “rejuvenation” has been tucked into the major speeches at China’s biggest political event of the year, the meeting of its 3,000-member legislature.

It encapsulates the ruling Communist Party’s overriding long-term objective: To build the nation into a truly global power, one that commands respect from the rest of the world.

Xi depicted China as a  rising,  but “benevolent great power that only has humanity’s best interests at heart. He called for macroeconomic coordination to “jointly promote strong, sustainable, balanced and inclusive growth of the world economy.”

He repeated China’s familiar plea that states “abandon ideological prejudice and jointly follow a path of peaceful coexistence, mutual benefit, and win-win cooperation.” Saying “no two leaves in the world are identical,” he emphasized that “each country is unique” and “none is superior to the other.” Instead of judging social systems according to some set of universal values, therefore, “the best criteria are whether a country’s history, culture, and social system fit its particular situation … [and] serve to deliver political stability, social progress, and better lives.”

That goal is intertwined with another one: retaining a hold on power. The party keeps a tight grip by censoring the digital space, controlling the news media and locking up those who publicly challenge its line. But it also tries to woo the public by stoking national pride in the country’s growing global clout to justify its continued rule after more than 70 years at the helm.

“By enabling the Chinese nation to make another giant stride toward rejuvenation, the (Communist Party) Central Committee has delivered impressive results that our people are happy with and that will go down in history,” Li Zhanshu, the party’s No. 3 official, told lawmakers this week.

Rejuvenation is repeated like a mantra, even woven into a sprawling exhibit at the national art museum marking the Year of the Ox in the Chinese zodiac. The exhibit’s introduction invokes the diligent ox and credits party leader and head-of-state Xi Jinping for deepening “the understanding of the great striving of the Chinese nation.”

That perspective is an important dynamic as policymakers in Washington and other capitals work out how to navigate China’s rise and the global changes in its wake.

Chinese leaders are bent on developing a more sophisticated economy and a more powerful military, and accelerating growth of the domestic market and high-tech capabilities in the face of U.S. tariffs and restrictions. They are looking for opportunities to demonstrate global leadership, from the COVID-19 pandemic to climate change. And they are less willing to accede to the demands of others on issues such as human rights.

That presents a multitude of challenges for U.S. President Joe Biden. There is room for cooperation on climate change. There are differences on trade and technology to try to hash out. Their navies are jockeying for position in the western Pacific. And deep divisions remain over Taiwan, Hong Kong and China’s largely Muslim Xinjiang region, where both sides are digging in their heels.

In its march to hoped-for rejuvenation, the Communist Party is marking two centennials. This July will be the 100th anniversary of its founding. And 2049, that of its taking power in 1949.

For this year, the goal was creation of a “moderately prosperous” society. Per capita GDP has topped $10,000, putting China solidly in the ranks of upper middle income countries, though the wealth gap between urban rich and rural poor is huge and widening.

The goal for 2049 is grander. The aim, Xi told the 19th party congress in 2017, is achieving basic common prosperity for all Chinese so they enjoy happier, safer and healthier lives. China would also be a global leader in national strength and international influence.

As an interim goal, Xi has said that the economy could double in size by 2035, which would take per capita GDP to about $20,000.

To that end, the National People’s Congress, at its annual meeting that wraps up Thursday, is expected to endorse the party’s next five-year plan, laying out its economic, military and other goals.

There are potential bumps in the road. China’s population is aging before the economy is fully developed, an outgrowth of it’s once harsh one-child policy. It’s unclear if the party’s rigid system can manage an increasingly complex society and economy that increasingly depends on creativity instead of central planning for growth.

The term “rejuvenation” harkens back to the peak of China’s imperial era, when it was a technological and cultural leader in Asia. The Qing Dynasty later weakened in the 19th century, and western nations that had become more militarily powerful forced it to make a series of territorial and trade concessions.

The idea of rejuvenation underpinned not only the appeals of the communists but other revolutionaries and reformers in the early 20th century. But as various forces vied for power and China descended into chaos, Japan invaded and occupied much of the country through the end of World War II.

The Communist Party often invokes this “century of humiliation” in its bid to make China strong again. After decades of rapid economic growth, it is closer to achieving its ultimate goal than ever before.

“The Chinese nation, which since modern times began had endured so much for so long, has achieved a tremendous transformation: It has stood up, grown rich, and is becoming strong; it has come to embrace the brilliant prospects of rejuvenation,” Xi said in his 2017 party congress speech.

The question is what China’s rejuvenation would mean for the rest of the world. Is it a driver of global economic growth, the world’s biggest consumer market and a source of investment for other countries? A military and industrial threat that will bully smaller neighbors and steal technology? Will its success encourage some other countries to pursue authoritarian governments and turn away from the democracy espoused by America?

“China’s got the wind at its back as it heads towards a position of greater power and eventual, from their perspective, preeminence in the global balance of power,” said Bonnie Glaser, director of the China Power Project at the Center for Strategic and International Studies. “And that’s a huge challenge for the Biden administration.”

Biden and his deputies have signaled a tough line on China. Secretary of State Antony Blinken, in a recent speech, called China “the only country with the economic, diplomatic, military, and technological power to seriously challenge the stable and open international system – all the rules, values, and relationships that make the world work the way we want it to.”

The public posturing may give way to diplomacy, but China’s ultimate goals — whether to become a technology leader or extend its naval reach in the South China Sea — are unwavering. As America struggles with recession and the pandemic, China and its leaders grow more confident about its rejuvenation.