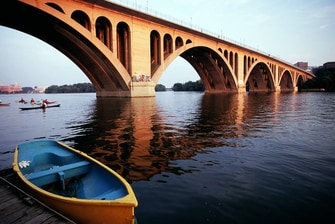 The service member died due to an apparent medical emergency, officials said. He was not on duty at the time of the incident.

Metropolitan Police officers received a call shortly after midnight that a man was dead at the JW Marriott hotel located on the 1300 block of Pennsylvania Avenue, D.C. police said.

At this time, the events leading up to the service member’s death are unknown. The investigation is still ongoing, police said.

Officials said they will not release the name of the Guard member until his next of kin are notified of his death.

According to a statement issued by the Pentagon close to 2,300 Guard troops will continue to provide security in Washington until May 23, at the request of the Capitol Police. There are currently about 5,100 Guard troops in Washington. The Pentagon said defense officials will work with the Capitol Police to incrementally reduce the number of Guard needed in the city as time goes on.

“It’s not just about a threat assessment, it’s about assisting and supporting capabilities that the Capitol Police may now lack and may need to look at improving,” Chief Pentagon Spokesman John Kirby said, adding that the extension request was based largely on using the Guard to make up for gaps in the capabilities of the Capitol Police.