FRANCIE (March 20, 2021)–France and Poland have reintroduced partial lockdowns as both countries battle a sharp rise in Covid infections in recent weeks.

Some 21 million people in 16 areas of France, including the capital Paris, are affected as the country fears a third wave.

In Poland, shops, hotels, cultural and sporting facilities are closed across the country for three weeks.

The country has the highest new daily rates of Covid cases since November.

Coronavirus cases are also rising exponentially in Germany, with Chancellor Angela Merkel warning it is likely that the country will now need to apply an “emergency brake” and re-impose lockdown measures.

The vaccine rollout across the European Union has been hindered by delayed deliveries as well as the suspension in several countries of the use of the Oxford-AstraZeneca Covid-19 vaccine, over fears of possible side effects.

In France, the partial lockdown took effect from midnight on Friday.

Trains leaving Paris for parts of the country where lockdown restrictions do not apply, such as Brittany and Lyon, were reportedly fully booked hours before the measures were due to come into effect.

Traffic jams were reported on several roads leaving the capital.

The new restrictions are not be as strict as the previous lockdown, with people allowed to exercise outdoors.

Non-essential businesses are shut, but schools remain open, along with hairdressers if they follow a “particular sanitary protocol”.

France has reported more than 4.2 million infections since the start of the outbreak, with nearly 92,000 Covid-related deaths, according to the data compiled by America’s Johns Hopkins University. 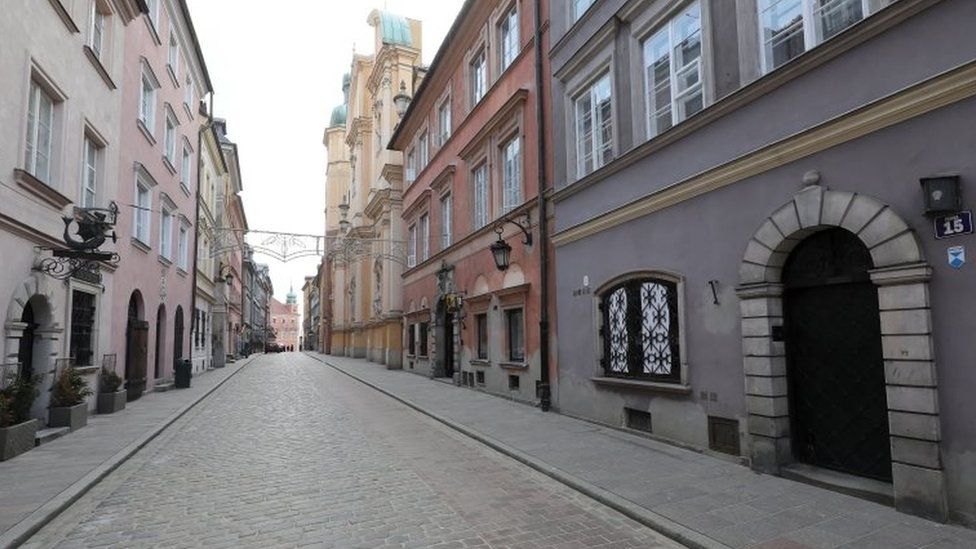 In Poland, the three-week lockdown begins on Saturday.

Polish health officials earlier warned the nationwide restrictions were necessary because of a rampant British variant of Covid-19 in the country. The variant now makes up more than 60% of infections.

Poland has had more than two million confirmed infections, and nearly 49,000 deaths, according to Johns Hopkins.

Germany said on Friday is was now classifying neighbouring Poland as high risk. This means that from Sunday anyone crossing the border from Poland must provide a negative coronavirus test.

What’s the latest on the AstraZeneca vaccine?

Despite assurances from the European medicines regulator that the AstraZeneca vaccine is safe and effective, some countries remain reluctant to resume their campaigns using the vaccine.

Finland’s health authority has announced a pause in its use of the vaccine that will last at least a week.

The move, which follows two reports of blood clots in patients who had received the vaccine in the country, was said to be a precautionary measure.

Meanwhile, Sweden, Denmark and Norway said on Friday that they needed more time to determine whether they should resume AstraZeneca inoculations.

Germany, Italy, France, Spain and the Netherlands are among the countries that have restarted their AstraZeneca vaccination campaigns.

Health authorities in France have recommended that the vaccine be offered only to people aged 55 and over.

The European Medicines Agency (EMA) reviewed the vaccine after 13 European countries suspended use of the vaccine over fears of a link to blood clots.

It found the vaccine was “not associated” with a higher risk of clots.

The World Health Organization (WHO) has urged countries to continue using the AstraZeneca vaccine.

On Friday, experts at the WHO said the vaccine had “tremendous potential to prevent infections and reduce deaths across the world”.

“The available data do not suggest any overall increase in clotting conditions such as deep venous thrombosis or pulmonary embolism following administration of Covid-19 vaccines,” the WHO’s Global Advisory Committee on Vaccine Safety said in a statement.

Other European leaders have sought to reassure citizens that the Oxford-AstraZeneca jab is safe.

Italy’s Prime Minister Mario Draghi, 73, said he would happily have the vaccine, but that he had “not yet made a booking”.