World News: His Royal Highness The Prince Philip, Duke of Edinburg Has Passed Away Peacefully at Age 99

LONDON (April 9, 2021)—Buckingham Palace has confirmed the death of “His Royal Highness The Prince Philip, Duke of Edinburg.

His Royal Highness passed away peacefully this morning at Windsor.”

It is with deep sorrow that Her Majesty The Queen has announced the death of her beloved husband, His Royal Highness The Prince Philip, Duke of Edinburgh.

His Royal Highness passed away peacefully this morning at Windsor Castle. pic.twitter.com/XOIDQqlFPn

Prince Philip was an extraordinary Prince.  His mother and father met at the funeral of Queen Victoria in 1901. At a time when all but four of Europe’s nations were monarchies, his relatives were scattered through European royalty. Some royal houses were swept away by World War One; but the world into which Philip was born was still one where monarchies were the norm. His grandfather was the King of Greece; his great-aunt Ella was murdered along with the Russian tsar, by the Bolsheviks, at Ekaterinberg; his mother was a great-granddaughter of Queen Victoria.

At Dartmouth Naval College in 1939, the two great passions of his life would collide. He had learned to sail at Gordonstoun; he would learn to lead at Dartmouth. And his driving desire to achieve, and to win, would shine through. Despite entering the college far later than most other cadets, he would graduate top of his class in 1940. In further training at Portsmouth, he gained the top grade in four out of five sections of the exam. He became one of the youngest first lieutenants in the Royal Navy.

When King George VI toured the Naval College, accompanied by Philip’s uncle, he brought with him his daughter, Princess Elizabeth. Philip was asked to look after her. He showed off to her, vaulting the nets of the tennis court in the grounds of the college. He was confident, outgoing, strikingly handsome, of royal blood if without a throne. She was beautiful, a little sheltered, a little serious, and very smitten by Philip.

His four older sisters would all marry Germans. While Philip fought for Britain in the Royal Navy, three of his sisters actively supported the Nazi cause; none would be invited to his wedding.

When peace came, and with it eventual economic recovery, Philip would throw himself into the construction of a better Britain, urging the country to adopt scientific methods, embracing the ideas of industrial design, planning, education and training. A decade before Harold Wilson talked of the “white heat of the technological revolution”, Philip was urging modernity on the nation in speeches and interviews. And as the country and the world became richer and consumed ever more, Philip warned of the impact on the environment, well before it was even vaguely fashionable.

Philip’s life was a world entirely governed by men.  He was a rugged, physical man who was brought up and then worked in an entirely male environment. He celebrated masculinity, telling Mike Parker on the birth of his first son Charles, “It takes a man to have a boy.” But literally overnight, and for 65 years to follow, it became his life to support his wife, the Queen.

He would walk behind her. He would give up his job for her. He would apologise if he came into a room after her. At her coronation he knelt before her, his hands enclosed by hers, and swore to be her “liege man of life and limb”. His children would not bear his name, Mountbatten. “I’m nothing but a bloody amoeba,” he exclaimed at that. But there was nothing to be done. She was the Queen. He was her husband.

Prince Philip talked of the upending of circumstance little. “Within the house,” he said of the time before the Queen’s accession, “I suppose I naturally filled the principal position. People used to come and ask me what to do. In 1952 the whole thing changed very, very considerably.”

“He believes he has a creative mission,” wrote an early biographer, “to present the monarchy as a dynamic, involved and responsive institution that will address itself to some of the problems of contemporary British society.”

He was young and very good looking; he smiled and joked and was at ease in front of the cameras. When he visited a boys’ club in London in the late 1950s, a photo shows him with a broad smile on his face, looking crisp in a double-breasted pinstripe suit, his hair slicked back with brilliantine, surrounded by the upturned faces of boys and their mothers all shoving and trying to get close to him. There is more than a whiff of Beatlemania to the moment.

In his study on the first floor of Buckingham Palace, overlooking the gardens and Green Park, surrounded by thousands of books, with a model of his first command HMS Magpie to one side, he would research and write and type out his speeches. (In 1986 he would buy, always the moderniser, what he called a “splendid gadget” that he called “a miniature word processor”.) He gave between 60 and 80 speeches every year, decade after decade, on topics that reflected his vast range of interests.

Out of the speeches comes a picture of the man. For someone who sat through so much of it, he was clearly impatient with ceremony. “A lot of time and energy,” he told students and staff at the Chesterfield College of Technology, “has been spent on arranging for you to listen to me to take a long time to declare open a building which everyone knows is open already.”

Reflecting his dizzying range of interests, there was sometimes a touch of the gentleman-farmer to his thoughts – well-organised arguments that don’t really go anywhere, a lot of anecdotal evidence (“it seems to me…”) garnered from his extensive travels.

Despite modernising instincts, he was a conservative, somewhat suspicious of the machinations of the big city. He spoke of “urban dwellers” and of the “average citizen” dumping rubbish from their car. He preferred practical solutions to highfalutin theory – “The enterprise is doomed,” he told the Commonwealth Conference on Industrial Relations, “if it is allowed to enter the rarefied atmosphere of theory.”

He was an environmentalist before anyone really knew what that was. He warned of the “greedy and senseless exploitation of nature.” And in 1982 he brought up a topic that now grips us, but back then was almost never spoken of, “a hotly-debated issue directly attributable to the development of industry… the build-up of carbon dioxide in the atmosphere,” which he referred to as the “greenhouse effect”.

And he constantly did himself down, shrugging as to why anyone should want to hear him speak: “I have very little experience of self-government,” he told one audience, “I am one of the most governed people you could meet….” His example of irrational behaviour? – “making and listening to speeches on important occasions”. Or speaking before the Brussels Expo in 1958 – “I feel I can claim to be an expert at going round exhibitions.” He knew most speeches were a dull formality that had to be got through – and he was happy to let his audience have a laugh at his expense.

It is another contradiction in a life of them; that someone who cared so much about how we live our lives, about how to pursue a good and moral life, about how government and society might try to channel our instincts, should end up being popularly portrayed as a saloon-bar bore, his retirement from public life in 2017 accompanied by lists of his “gaffes”, off-colour comments and salty jokes.

That he could be rude, startlingly so at times, there is no doubt. Part of it was impatience, that dynamo whirring away, the desire to get things done double-quick. Part of it may have been deafness, inherited from his almost wholly deaf mother. But part of it was just plain bad manners, a disregard for what others felt and a thoughtlessness that came from position and temperament.

There was for a long time a fair amount of barking and shouting at those who failed to please him, and not a lot of thanking those that did. 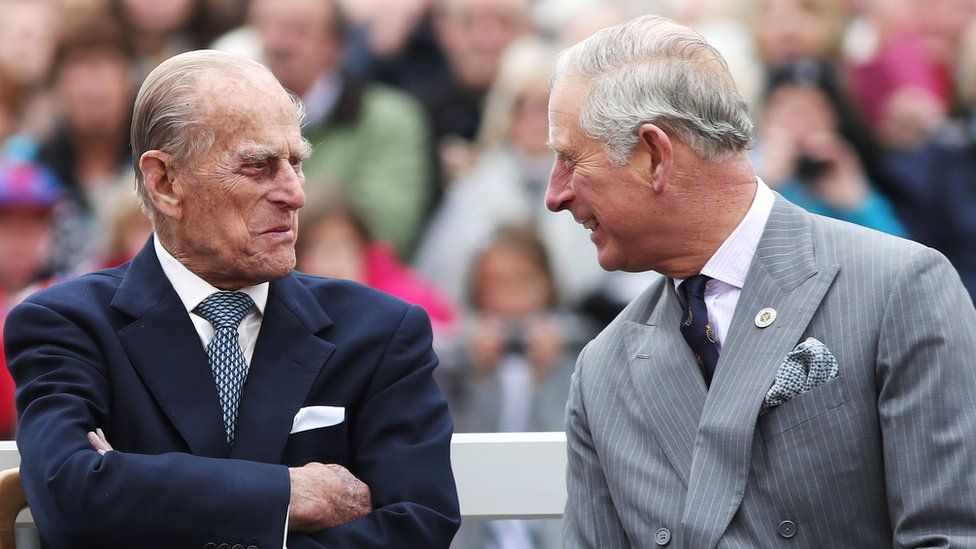 Looking back down the decades, two great contrasts stand out. The first, that between a life led in the public eye, and a really quite private man. The boy shuttling between guardians and schools and countries quickly learnt to seal off his private side from public view. Inside the Palace it became his world view. Most of his biographers’ personal queries were met with a shrug, as if to say “I don’t know why you are bothering”. He once said of his son Charles: “He is a romantic, I am a pragmatist. And because I don’t see things as a romantic would, I’m [perceived as] unfeeling.” There can be little doubt that he was stung by the accusation. But his inner thoughts were not for public consumption.

And the second great, related, contrast is that between the near unceasing whirl of his public life, and a degree of solitude in his private. Of course there was family, though all his sisters pre-deceased him. But few, if any, great friendships are recorded, a corollary of his private nature and the pattern of his many decades. “Life,” wrote one biographer, “hasn’t enabled him to build up friendships. He is going round the world at such a lick.” And royalty is its own curious cage, repelling outsiders. “What the royal family offers you is friendliness,” said the late James Callaghan, prime minister in the 1970s, “not friendship.”

Major General Charles Stickland of the Royal Marines, of which for 64 years Philip was Captain General, tells of when the duke flew into an exercise in Norway. He was supposed to say a quick hello to the enlisted men and then have lunch with the commanding officer. Instead he “asked two of the corporals to spoon food into his mess tin, sat on a Bergan [rucksack], told stories and chatted away with my troops when he was supposed to be having a posh lunch and then got back on the helicopter, having inspired a group of young men as to why it was great to be a Royal Marine”.

It was vintage Philip; no ceremony, hierarchy pushed to one side, the big group over the more intimate gathering.

Because of his desire for privacy, because of his position, and because nearly all who knew him best have gone, our understanding of him will always be incomplete. But that’s also because of what kind of person he was, because of the contradictions and contrasts that emerged over the decades. “A mercurial man like His Royal Highness,” said the artist and architect Sir Hugh Casson, “needs a loose fit portrait.”

He was asked once what his life had been about (the sort of question that normally received an incredulous snort). Had it been about supporting the Queen? “Absolutely, absolutely,” he replied. He didn’t see himself as a leader, though lead he could. And his own achievements he consistently played down. Accepting the Freedom of the City of London in 1948, he spoke for himself and for what he called other “followers”, with trademark modesty. “Our only distinction,” he said, “was that we did what we were told to do, to the very best of our ability, and kept on doing it.”