“How the Removal of Tariffs Would Impact Agricultural Trade”

CITY OF WASHINGTON, D.C. (June 10, 2021)—Tariffs are a type of tax that governments impose on imports for a variety of reasons, including a way to raise revenue and to protect domestic industries. This latter reason—protection—can come at a cost to domestic consumers in the form of higher prices. The resulting higher prices may stimulate or impede changes in the supply of goods, resulting in impacts on the global balance of trade called “distortions.”

The World Trade Organization (WTO) was formed in 1995 in part to improve market access for trade by negotiating for its members the elimination of barriers, such as bans, that restricted trade by converting them to tariff equivalents. While these tariffs were intended to increase market access for agricultural products, they still can limit trade.

If tariffs do limit trade, what might happen if all agricultural tariffs were removed? A USDA, Economic Research Service (ERS) study addressed that question in a recent report, Reforming Market Access in Agricultural Trade: Tariff Removal and the Trade Facilitation Agreement. ERS analyzed a hypothetical scenario in which all global tariffs are removed on agricultural trade as well as a second scenario in which the reduction of certain trade costs on agricultural goods is facilitated under an agreement overseen by the WTO. The results indicated that global trade and consumer well-being would improve most with the complete removal of tariffs.

What Is a Tariff and Why Would It Limit Trade?

A tariff may be a fixed charge per unit of product imported (specific tariff), a fixed percentage of value (ad valorem tariff), or a combination of both. Tariffs can also be used in combination with a quota, becoming a tariff-rate quota. Tariff-rate quotas provide some market access, but their often high over-quota rates limit how much trade can occur.

Tariffs distort trade markets by affecting the equilibrium price and quantity that would occur in an efficiently operating market. Tariffs raise the price of imported items, which can result in higher prices for imported goods relative to the prices of similarly produced domestic goods. This in turn can have a supply-side impact whereby producers increase production of domestic goods.

Tariffs are the largest source of global economic costs generated from agricultural policy distortions. Efforts to further reduce global market-distorting policies within the WTO have largely stalled, and countries have pursued bilateral and regional trade agreements outside the WTO instead. Even so, agriculture often is still protected in those agreements, so tariffs on agriculture remain high. High tariffs and tariff-rate quotas continue to limit trade for many agricultural products.

Tariffs also vary widely by agricultural sector. The global average tariff by agricultural sector analyzed in the ERS study is the highest for corn (see figure below). While most regions have small (5 percent or less) or no tariff on corn, South Korea’s corn tariffs average 328 percent as part of its tariff-rate quota. Because South Korea imported one-third of all global corn imports in 2014, its tariff carries a heavier weight in the calculation of the average global tariff, driving it above 50 percent. Of the other agricultural commodities, the category that includes poultry and pork (known as “other meats”) has the second-highest average tariff (17 percent), followed by oilseeds (at 16 percent, and again attributable to South Korea’s high out-of-quota rate). 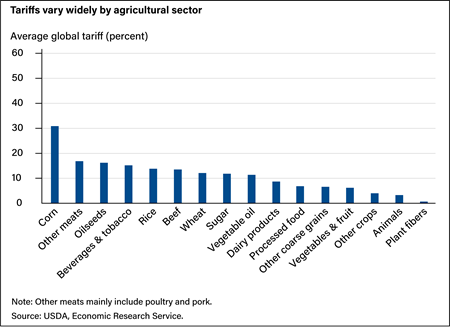 Most Regions Would See Increases in Imports, Exports

To simulate the effects of the total removal of agricultural tariffs, ERS used a computable general equilibrium (CGE) model. A CGE model is a large system of equations and data that links commodities, regions, and economic agents together to calculate the potential effects of a change in policy. In this study, the model separated the agricultural sector into 16 commodities and divided global regions into 20 entities, some being individual countries and others being country groupings. This allowed for a more precise analysis of the agricultural sector.

The model simulated the removal of all tariffs on agricultural commodities and reported estimated changes to agricultural trade, production, prices, and welfare. It stated the effects of trade in terms of changes in relative values, not in volume. The results indicated that by removing agricultural tariffs, global trade would increase by more than 11 percent.

Results indicated that the largest export gains would occur in regions that are already large agricultural exporters. All regions other than the EU would realize an increase in agricultural exports as well as imports (see chart below). The EU would potentially experience a slight decrease in exports due to the lost markets for its meat products. Global demand for specific commodities played a role in the simulated trade changes. By commodity, the “other meats” group, rice, and beef showed the largest potential increase in exports from tariff removal (refer to chart below). The large increase in other meats could be attributed to high tariffs in many regions, including the EU. On the other hand, much of the global population consumes rice, explaining the large increase in its trade. Some commodities indicated very little change in trade, and live animals showed a decrease. 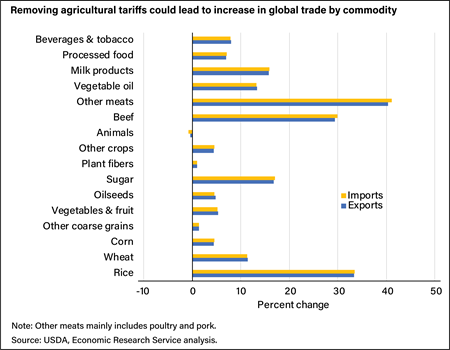 This study demonstrates the potential benefits to agricultural trade from changes in policy and the reduction of trade costs. Global agricultural trade could increase if tariffs on agriculture were removed or trade costs were reduced. The removal of tariffs could shift resources away from commodities that might be inefficient toward the production of commodities that could be produced more efficiently. However, although these gains could represent an increase in agricultural market access, other non-tariff measures—such as sanitary or technical regulations—could linger and continue to limit market access.

Source: This article is drawn from…