CITY OF WASHINGTON, D.C. (June 20, 2021)—The recent outbreak of Israeli-Palestinian violence raised renewed discussion on how Arab states that inked normalization agreements with Israel in 2020 can advance peace between Israelis and Palestinians. The “new normalizers” (UAE, Bahrain, Sudan and Morocco) may be weighing the pros and cons of heavily involving themselves in efforts to resolve this protracted conflict but should not dismiss the opportunity. They can and should play a more proactive and constructive role, which would enhance regional stability and prosperity and advance the normalizers’ own interests. It will be up to the international community, the Palestinians and regional stakeholders to bring them into the peacemaking fold. 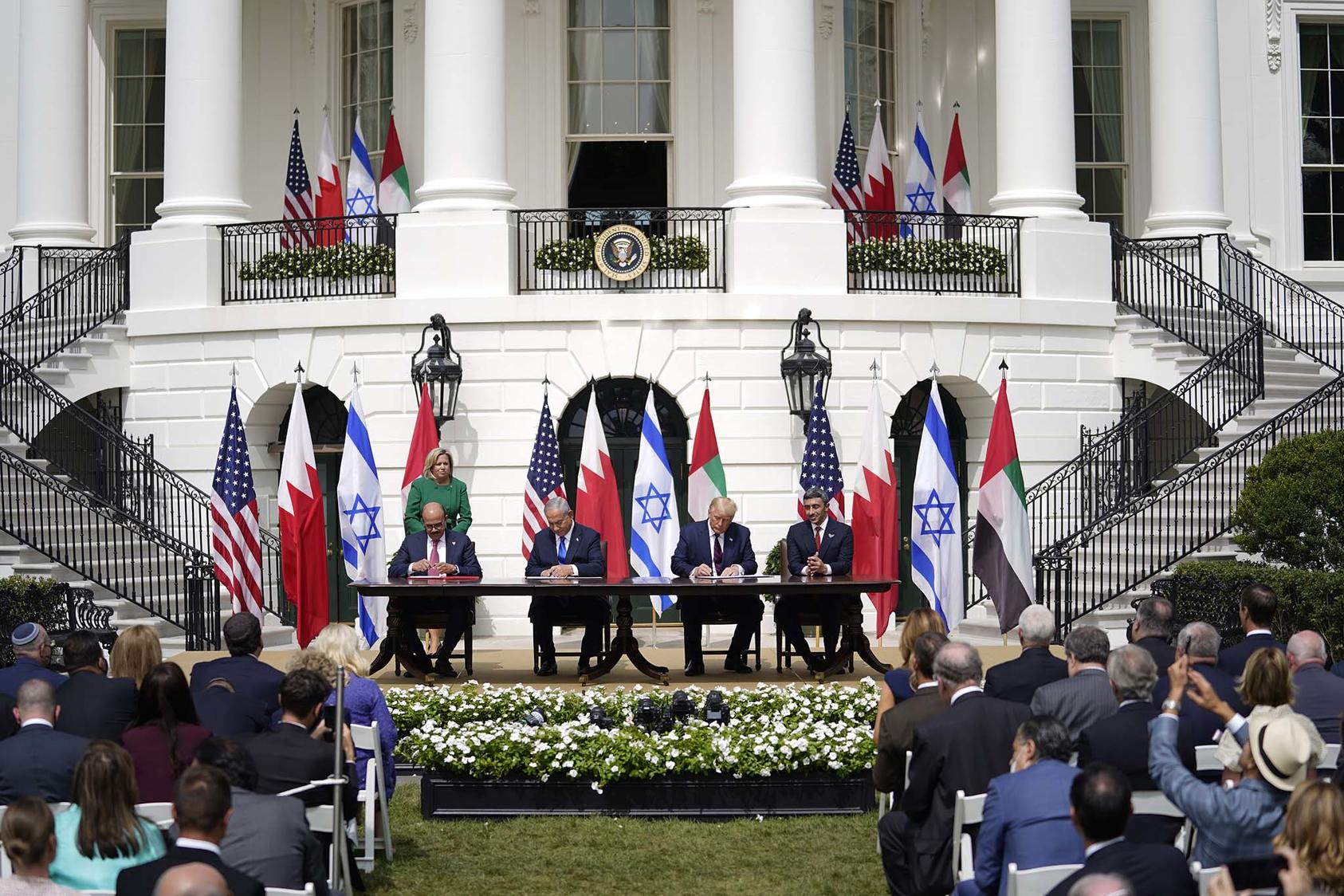 In 2020, the UAE, Bahrain, Sudan and Morocco made the decision to establish relations with Israel for their own reasons, independent of the Palestinian question. The UAE considered normalization with Israel a crucial step to advance its own national security and relations with the United States, including to realize a long-held desire to acquire F-35s and other advanced weapons. Bahrain also felt that normalization with Israel would significantly advance relations with the Washington along with its national interests. In exchange for re-establishing relations with Israel, Morocco was rewarded with U.S. support for its position on one of the country’s most important issues: the Western Sahara. Similarly transactional, Sudan was taken off the U.S. list of State Sponsors of Terrorism and given legal immunity from prosecution for terrorist incidents in U.S. courts.

In the Middle East, the decisions were controversial for their lack of connection to the Palestinian cause, contradicting a longstanding paradigm. The UAE was the only country that successfully linked normalization with a clear and specific demand of Israel: that the country suspend its plans to annex 30 percent of the West Bank in the context of the Trump Middle East peace plan. Ultimately, Israel’s decision to not proceed with annexation last summer was driven by a number of domestic and international factors, but the UAE normalization agreement was instrumental.

The Palestinians felt blindsided by the UAE’s decision to normalize relations with Israel. Their assessment was that they had been robbed of an important negotiation card — the Palestinians’ Arab allies willingness to establish relations with Israel — necessary to pressure Israel to make concessions in accordance with the 2002 Arab Peace Initiative. They also feared that this may just be the beginning of Arab or Islamic countries joining the fold due to U.S. pressure or other considerations.

Initially aggressive in their reaction, Palestinian leadership later toned down their rhetoric as they internalized what they have been unwilling to admit for years: resolving the Israeli-Palestinian conflict has declined in priority for many countries in the region and beyond. Nonetheless, it remains at the heart of regional peace and stability even as a multitude of conflicts and crises — particularly in the last decade — have forced regional states to shift priorities and focus on more issues they viewed as more pressing.

Relations between the UAE and Palestinian Authority President Mahmoud Abbas have been deteriorating for years, culminating in a major confrontation after the announcement of the normalization agreement. Tensions with Bahrain also worsened in 2019, after Bahrain hosted the Manama economic workshop in late June 2020 in the context of the Trump plan. Relations have since improved marginally. In contrast, as a result of a phone call between the King of Morocco and Abbas, Palestinian-Moroccan relations did not publicly deteriorate. Further, Palestinian leadership was also sympathetic to Sudan’s predicament, given the country’s dire need to be removed from the U.S. terrorism list after the 2019 revolution.

Former Israeli Prime Minister Benjamin Netanyahu was elated by Israel’s new regional ties, trying (in vain) to leverage these agreements into victory in Israel’s recent parliamentary elections. Appealing to the Israeli far right, Netanyahu argued that these agreements ushered in a new era of “peace for peace,” without need for Israeli concessions. Netanyahu also trumpeted Iran as the region’s primary and unifying threat, seeming to suggest that the Palestinian question is no longer of importance.

The State of the Normalization Agreements

Several Emirati experts have reported that the UAE’s decision to establish relations will not be reversed by troubling developments in the Israeli-Palestinian conflict. These reports also recognize that the Emirates’ decision is based on the conviction that an end to conflict through peaceful means is the ultimate objective and that the war on Gaza is a huge challenge to this approach.

Similarly, Bahrain, Sudan and Morocco will not sever relations with Israel because of the recent conflagration. Therefore, the focus should be on examining how these relations and their evolution can advance Israeli-Palestinian peace prospects. This is a question of political will for the “new normalizers” and is also dependent on the way in which the Palestinian leadership conducts its relations with these countries.

Relations between the new normalizers and Israel are advancing at varying speeds. Israeli relations with the UAE flourished quickly. The UAE announced it was setting up a $10 billion investment fund aimed at strategic sectors in Israel. Tens of thousands of Israelis visited the UAE and Israel continued to promote tourism despite the ongoing conflict. They agreed to cooperate on sensitive issues like education, research in artificial intelligence and COVID, on trade targeting $4 billion a year, taxation, daily direct flights and more.

Relations with Bahrain and Morocco are advancing at a slower pace, as these states calibrate foreign and domestic politics with national interests. Sudan has been the most cautious, which is understandable given its ongoing transition. All new normalizers have faced setbacks during the honeymoon period — even the euphoric Emiratis expressed anger with Netanyahu for trying to use leverage these relations in his election campaign, and have tried to quiet some news coverage of the deepening relationship.

Where to Go from here?

It is generally recognized that the fruits of the normalization agreements, as affirmed by an Emirati scholar, “will not be complete without finding a comprehensive solution to the Palestinian issue.” It is likely the case that the early stages of normalization are when the new normalizers will have the highest leverage to influence Israeli policy. Three factors will be crucial in how this situation evolves:

The seven countries in this coordination group would work with the Palestinians and the Israelis to synchronize advancing relations with advancements toward peace. The multi-state body can also work with the United States and the EU and build on the efforts of other cooperative mechanisms like the Munich Group (Egypt, Jordan, France and Germany), which recently suggested confidence-building measures both sides can take in preparation for more ambitious future steps. The Ad Hoc Liaison Committee (AHLC) on the Palestinian Economy can also play an important role. It met in February 2021 to support Palestinian economic development with an eye toward improving the situation in Gaza. At this meeting, the United States reaffirmed its commitment to advancing prosperity, security and freedom for both Israelis and Palestinians and to preserve the prospects of a negotiated two-state solution in which Israel lives in peace and security alongside a viable Palestinian state.

This will be a daunting task. Egypt and Jordan should play a role in initiating a dialogue or perhaps even mediating efforts to reduce tensions and difficulties between the Palestinian leadership and any of the normalizing countries in a manner that can foster an environment conducive to peacemaking, especially in preparation for a new phase in Israeli politics.

Source: US Institute of Peace

Photo: Representatives from Bahrain, Israel and the United Arab Emirates with President Trump during a signing ceremony for normalization agreements between Israel and the Arab states, Sept. 15, 2020. (Doug Mills/The New York Times)